The Great Manchester Cycle - a report

When I was asked if I wanted to take place in the Great Manchester Cycle, I jumped at the chance. I find it difficult to get long bike rides in, way more difficult than long runs for some reason, so I figured this would be excellent triathlon training and an opportunity to earn my first bike bling.

I met Chantal at the station and we cycled along the canal to the event village and start at the Eithiad Stadium. There was a great atmosphere here, with food stands, bike maintenance help from Edinburgh Bikes and the all important toilets which were (shock horror) actually clean! We were taking part in the 26 mile event, and as we arrived the 52 milers were just finishing. Well done you.

After a small delay we were off! It was a little cramped at the start, with everyone trying to get out of the stadium area and on with their cycle, but once out of the roads everyone dispersed and it never felt really congested. The route took us towards town, over Mancunian Way and on towards Old Trafford. After another little loop near the Quays we went back towards the stadium ready for lap two of the 13 mile route. The 52 mile option did four loops before we started, and the 13 mile event one loop. The staggered starts for the different distances meant that you were only ever among people of your event which felt like a good thing as well as keeping congestion to a minimum.

The route was good, very urban (ie city roads) but did take in some of Manchester's famous landmarks including the two football stadiums and the Beetham Tower. The freedom of riding on traffic free roads felt really nice and was way more enjoyable than riding with the traffic. It was also pretty flat with just a couple of short inclines, and there were little pockets of supporters dotted around the course. There was also an area halfway through the loop where you could stop for any maintenance issues, food or water if you needed to, which was reassuring even though we didn't use it.

Back into the stadium area at the end, music was blaring adding to the party atmosphere and names were announced as you crossed the finish line. We collected our goody bag including t-shirts and all important medals before cycling home to enjoy some well earned post-ride beers.

As with everything, cycling with friends is way more enjoyable than going it alone and as a way more experienced cyclist than me, Chantal kept my pace up whilst also having a good natter and a catch up along the way. One lap of the route is the distance I'll have to cycle in the triathlon, which we covered in 47.55 which I was really happy with. If I manage that on the day after a swim and before the run I will be a very happy Crandon. 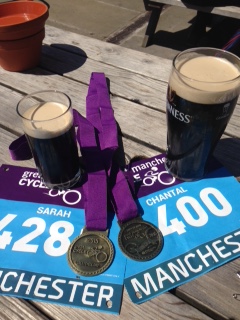 We were kindly given our places in the Great Manchester Cycle for free and they knew that I would be blogging about the event.