This time last year I set myself 5 'Runolutions' - running goals and resolutions for 2015 - and boy did I have fun trying to achieve them.

Without a marathon to concentrate on, 2015 saw me become a triathlete after completing the London Triathlon; run with Paula Radcliffe; be a poster girl in the This Girl Can campaign; learn to swim front crawl again, and take part in my first 24 hour race at Equinox24 which included getting up and running in the dark at 1.30am! Phew!

So let's see how I got on with the rest of my goals...

1) Join a running club
This is probably the best thing I've done for my running all year, hell probably ever! After a few tentative visits, in January I signed up to the Manchester YMCA Harriers and haven't looked back since. Running with these lovely lot has meant going to wonderful races I'd never have entered alone, tackling a 24  hour race and coming top ten, winning the Christmas 5K Handicap as well as lots of brilliant social outings - not to mention chat chat chatting all the way through our weekly club runs.


2) Go to parkrun and make it routine
As soon as I completed my first parkrun early last year, I knew I would be back. The atmosphere en route; waiting for the text later to confirm your time and the feeling of being back in the warm tucking in to a post run brekkie by 10am, have all contributed to the best start to the best weekends. This weekly free 5k has also helped in increasing my speed (my 5k PB is now 21.34) and kicked me into gear to up my mileage by incorporating it into a long run. I've run in a number of different parkruns and when I'm away always check if one is nearby! Brilliant.


3) Try out Cross Country
Not too long ago I did my first Cross Country race with the club. The wind was howling, the rain was pouring and the mud was slippery. But it was lots of fun. I've only completed one race so far but the season is young and I will be back for more in Jan!


4) Properly train for half marathons and try and break 1.45
Along with completing my triathlon, this is the running achievement I am most proud of in 2015 - completing the Wilmslow Half Marathon in 1.39! A new PB and much faster than the 1.45 I was hoping for. It was really hard work, but I really felt like I put the effort and training in, and unsurprisingly it paid off. I must remember this in my marathon training for Manchester 2016. 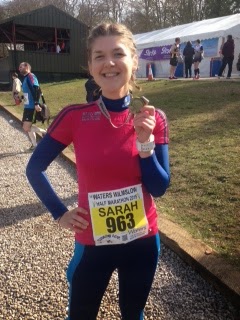 5) Have a clear out and lend a hand
A mile in her Shoes is a charity which helps women who have been affected by homelessness help find their feet through running. It's great, and I was really pleased when my new club told me they'd read my blog and were also doing a collection of running clothes to donate to the charity. So after sorting through my kit drawer I added my donations to the pile. In fact, having complained that my drawer is currently bulging, it's about time I had another clear out. I also volunteered to marshal our club race this year. It's nice to give something back and I should very much make it my goal to do more volunteering this year.

So there we have it - a pretty busy 2015 with lots of achievements I'm proud of. But the over riding bonus of the last year are all the lovely crazy people I've met and trained with along the way. From swimming, cycling, triathlon training and of course running, it's been the people who have been crazy enough to do these things with me that have really made it a brilliant year. 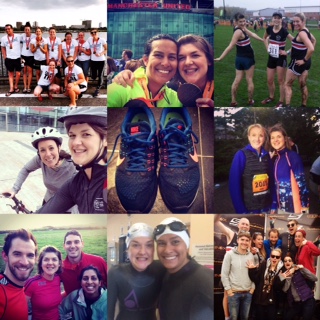 Posted by CrandonRuns at 18:23 No comments:

After a year off marathons there was much 'umming' and 'ahhing' over which marathon I would do come Spring 2016. Would it be London again after I loved it so much last time? Paris perhaps, along with a few Harriers? or would I run my adopted home city of Manchester?

After thinking about it at length, the lure of waking up in my own bed and celebrating post race at my local was too much for me and Manchester was entered! Im stupidly excited and am being bold and aiming pretty high for me with a time of 3.30. Yikes! This is massively quicker than my current PB of 3.51 so am hoping a lot of track sessions and hard work will help me get there. But in order to do that I'll also need to run some other races in the lead up to the big day.

These are, so far:

Cancer Research UK Winter Run 10k - 28th Feb Manchester
To run faster, you  need to...well run faster! So although 10k is not my favourite race distance, I figured I'd need a short sharp race to keep my speed up.  After it's launch in London last year, the Winter Run series has expanded to various locations throughout the country for 2016. As this 10k promises on course snow zones and plenty of polar bear hugs, I figured this was a good 10k to opt for and I was very kindly offered my place in it by the organisers. Im also hoping the fun course will help me beat my 10k PB which has been standing for over a year.

Coniston 14 - 19th March, Coniston
When I first joined my running club a year ago, the word 'Coniston' was said approximately 1 million times to me in the first couple of months and they were all to do with this lovely looking race in the Lake District. You get a slate table mat if you come top 10 and the scenery looks amazing. Im looking forward to the 14 mile course in March and it will hopefully act as a good gauge as to how I'm doing in my training. I can't wait to run a course which gets such rave reviews from my running buddies, especially as I'll get to run it along side them (well maybe quite a way behind the fast boys but you get the drift).


And so far, that's it! I'm on the look out for a good half marathon to chuck into the marathon training mix, along with weekly parkruns, cross country, club runs, long Sunday runs, track sessions....phew! I think it'll be a busy start to 2016!

What races are you planning for next year?

It was touch and go whether the Tatton Yule Yomp 10k would go ahead on Sunday thanks to Storm Desmond strutting his stuff. Lying in bed that morning listening to the wind howl and the rain on the roof, I didn’t much feel like getting out and entering the storm.

But when an email pinged into my inbox from the organisers whilst I was eating my pre-race porridge, I was really please to see that it was still going ahead, and not only because the alternative was to tackle a run in the rain alone. I was looking forward to this 10k; it would be my last race of the year and I'd heard really good things about it. Plus I love a festive run! I also was in the mood to get out there and was looking forward to running with some of the club.

The atmosphere as we arrived was great, with everyone in good festive cheer boosted by the brass band playing Christmas songs. We decided all races should definitely start with a brass band. Loads of runners were dressed up and I vowed that next year I would do the same. Amid the angels, penguins and various Santas, the best outfit had to be the guy running in A REAL CHRISTMAS TREE costume. I dread to think where his branches may have got caught mid run...

It was so fun and festive that I almost forgot we had to race, but the party atmosphere continued down at the start line.

The course itself was tough. Lots of trails, mud and fields were the order of the day and I found it hard work. I like the idea of trail running and appreciate the scenery, but I feel like you can't settle into a pace and are constantly tackling the course. That, and I realised I really need to invest in some trail shoes. It was fun, but just as I was thinking hoe the weather wasn't so bad after all, the rain started to hammer down on us. It was cold and the rain in the wind was painful! But it was also refreshing and I kept the post race cuppa in my mind to get me through.

At a little over half way a marshal told me I was 7th lady which meant I kept my pace up even though my quads were screaming at me - I quite liked the thought of being top 10 and I didn't want any speedy ladies coming through and overtaking me!

Soon enough the KM markers ticked by and I was up to 8km. It was here that we thankfully left the fields behind us and were back on the open road and on to the home straight. I could see the light of the finisher clock in the distance and kept pushing towards it until soon enough I was there!

It was no PB run but I was so glad that I'd been able to go out and finish my last race of the year and the tough course made it even better. The costumes, festive music, and brilliant organisation made for a great race, not to mention the best post race goody bag I've ever had (complete with whole loaf of bread, gingerbread snowmen, and teacakes).

Having some festive fun in the rain, 7th lady home and a time of 48.10 felt like a good way to finish my racing year.