One of my sisters once claimed she 'didn't do running' then this year she requested some running tights for her birthday and text me to say she'd run 5 miles. *proud face*

Last weekend she took part in the Gauntlet Games and is here to give us the lowdown. Over to Vici...

I feel it's only fair to warn you, I am a guest poster. If you are an avid runner and reader of Crandon Runs, who looks forward to the helpful running tips, you might want to stop reading. I have none. Except choose good pants.

That being said, I have recently started going for the occasional run (by this I mean mostly fast walking) and I quite like plodding along to my tunes.

So when my friend Becci mentioned the Kidney Wales Foundation Gauntlet Games, I was quite enthusiastic. Only 5k? Fighting gladiators on the way? Why not? I could do that!

On a slightly wet Saturday morning in early June, myself, Becci and 20 other friends arrived at the Coedarhydyglyn (sorry if you're not Welsh and can only guess how you would say a word with so few vowels!) estate in St Nicholas. We parked in a field where the grass was way up to my knees, and went in search of the enrollment desk to collect our race packs.

We were given our lovely blue kidney Wales t shirts at this point, and we just waited around for a bit on the side of a mountain waiting for our warm up to start.

There are two races on the day: the 5k Gladiator Gauntlet and the 10k which consists of a 5k trail run before the Gladiator zone. The 10k runners went off first then we were called in to warm up ready to start.

Now we were told the estate contained 'breathtaking views, rolling hills and extensive woodland,' but the hills! My poor old legs! I can honestly say I never thought whilst doing the course 'oh what a lovely view,' instead my mind was mostly preoccupied by 'oh another hill,' along with 'oh no - more mud' and 'why does the mud I am crawling in smell of animal waste?' At one point I actually said aloud... 'Oh good. A zombie.' So not your average race thoughts I should imagine.

All this being said though, it was quite good fun and the gladiators were on hand to battle you at a number of obstacles: a tyre wall, elastic web, very deep bogs, a balance beam, a giant ball pit, foam pit (tastes disgusting - close your mouth) and a massive wedgie-inducing slip and slide to name a few.

The gladiators were mostly encouraging and helpful, and you were able to skip any obstacles you didn't want to do. They were not particularly fierce thankfully, the worst were the children  who were bored spectating and were asked to help attack the runners at the bottom of the very last hill. They were, quite frankly, viscous! 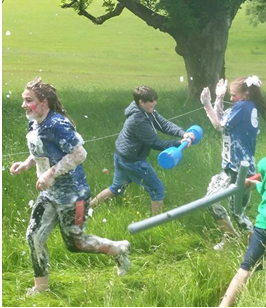 Then we all got a lovely medal to commemorate the worst experience of our lives. How kind! (This is a joke, I have had MANY worse experiences!)

There were a couple of things body wise that I was not prepared for though like the pain in my back. Apparently running uphill is not good for your lower lumber so the fact that I was in quite a bit of pain there worried me (I was blaming impact of jumping on the slip and slide so eagerly!)

I also found that running on the side of a mountain (I am stopping with the hill pretence) hurts your ankles as they are always at an angle.

The other things that didn't massively impress me were the lack of water stations. We were told in the info pack that we would have lots of them throughout but there was only one at what they informed me was the three quarters mark and then at the end when we collected out medals.

The set up was very basic, I was expecting dirt and mud but you also run through mud and clay, get squirted with paint, travel down a slip and slide and just keep going into more mud and grass and more foam. There is no where to shower or even wash after that. We were warned of this, but the volume of dirt that came home on my body was surprising. I ended up throwing my trainers away as I couldn't bear having them inside my washing machine.

The changing facilities were two igloo tents labelled men and women and some portaloos, and the race registration was a marquee, but the volunteers there had it under control. Key lockers were what appeared to be big water buckets where your labelled key sat and waited for you. Luckily we had spectators who were weighed down by all our crap, and they got to meet Welsh Rugby legend who came along to show his support.

The signposts on the course were unclear and consisted of some red and white plastic on a stick. This was confusing and sometimes hard to sport. I met a group of people that had accidentally ended up on the 10k course and more than one of our group went in the wrong direction at one point.

And then the final hill. No, not in the race. To get to the start, you had to walk down a fairly large incline and up another one. To get back to the car, you had to walk UP that same hill. Honestly, I thought I wasn't going to make it. My legs were like lead and jelly combined (strange, but trust me go with it.)

Things I found about running;
I don't like running with people - I'm not sharing my '99 with anyone! But also not in an exercise environment.

There's this opinion among my friends and family that I can be quite a difficult person (in reality I am a constant delight). I don't like small talk for the sake of it and I'm not a fan of people shouting encouraging things at me to 'help' me out. I just like to huff and puff as much as I need to, walk when I feel like it and run when I want to. I'm solo running from now on, but should mention that I still very much like everyone that took part in this with me.
Was it fun? Absolutely, looking back it was quite enjoyable. Would I do it again? No. I am not the right person but if you're the Tough Mudder type and loves getting a mud wrap while doing some exercise then this is for you! The people from our team who actually enjoyed it were Toni (army personnel) Tuesday (actual name) and Lucy who are quite strange to put it nicely. I will stick to fairly flat roads and trails from this point!


But we did this run for another reason. Becci's partner had a very scary and miserable time early this year due to his kidneys. It was very severe, but luckily they did an amazing job and she wanted to give something back to the people that helped during this time. Extra kudos to her for completing the whole course with a fractured rib!
It's a challenge, it's hard going, but it is for a wonderful cause and its something a bit harder and different than the average 5k race for charity.

DO IT! I'll be there next year laughing at all the contenders as they try to run after the slip and slide with the majority of their underwear in their arse crack!