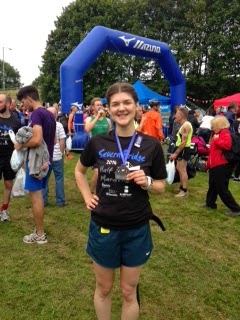 I like running. A lot. I run on Christmas Day, on holiday, when I'm away for the weekend, on my lunch hour, to work, from work...you get the drift.

But I didn't always run. Back in 2011 my brilliant Mum had found out she had breast cancer so I thought I really ought to raise some money for Cancer Research and tentatively entered a 5k 'Race for Life' in Hampstead Heath.

It was hard, I'd never done anything like this. I was in the 'oh yeah, I'd love to run a marathon one day' camp, rather than the person who actually gets up and willingly spends their spare time exercising.That 5k felt like forever but people were so supportive and it was, shock horror – fun! AND I managed to raise loads of money for a cause which really meant something to me. FAB.As I huffed and puffed my way around the heath I decided there and then that I really needed a bigger race, with lots of people supporting and cheering me on. As I happened to be making a big life move from old London to rainy Manchester, I thought what better way to mark the occasion than running a northern based race. The day after that first 5k I somewhat apprehensively entered the Great North Run. A whole half marathon.I ended up finishing the race in 2 hours and 43 seconds.And there it was. I was hooked.

Turns out I'm pretty competitive. Those 43 seconds bothered me. I knew I could run faster and I had never experienced the joy of wearing a well earned medal until that day. I bloody LOVE a medal!

Since then I've run both the Berlin and London Marathons, a number of 10ks and a quite few half marathons. Running has changed my life - people think of me as a runner, (which still surprises me) and I have done things I never thought possible.

So here I am. This is my blog - about me, training and more than likely eating. So join me as I hit the streets and run my way through life, training and other adventures.

You can drop me a line here:
crandonruns@gmail.com