My running club love a good post run celebration so when one of us suggested we ran the Round Sheffield Run - a 15 mile event over 11 stages with local beer at the end, we didn't waste any time in entering.

After a-way-too-early-for-a-Sunday alarm, we met bleary eyed at the station, armed with coffee and flapjacks and began our journey to Sheffield. Even the scenery on the train journey out there was lovely so it was looking like we would be treated to some gorgeous views, and we weren't disappointed. 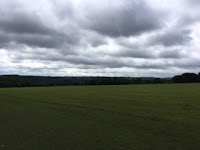 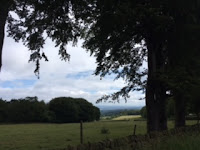 The route starts and ends at Endcliffe Park and uses the Round Sheffield Walk route. The 15 miles (ish) are divided into 11 stages of varying length, with the longest being 2.8km and the shortest being 0.8km. You then have a set amount of time to get from the end of one stage to the next, with the time being generous enough for a leisurely walk. Confused? Me too! I couldn't quite get my head around this 'staged' race, but figured it would all become clear on the day, and to be honest, it did!

It is your responsibility to clock in and out of each stage to record your time, which you do by dipping a little plastic fob into a scanner at the start and end points. At the end of the race you're then given a print out with your running time. We were given our fobs with our race numbers on check in and after a brief start line photo shoot we were ready to go. The race was started in waves with the earliest being around 0815 and the latest being 1015-1030. Even during your designated wave they start you off in groups of 4 so that you each have time to dip your fob and get your timing started. This meant that the course wasn't too congested and you could run with your pals as solo runners, or in teams, or as pairs. Slower runners were encouraged to start earlier and this seemed to work really well, with one of us Harriers opting for the earlier wave and finishing not too far in front of us.

The overriding feeling of this race was how inclusive and accessible it was. Breaking the distance into stages means its less daunting if you're not used to running that far, and it also means you can regroup with your mates at the end of each stage. It was great and ridiculously well organised! The first two stages were STEEP uphills but then they did provide lovely views so I will forgive them (just). Brutal though! The rest of the stages were a mix of ups and downs, through parks, trails and forests. It was beautiful and really really fun.

The only draw back was that the stop-start of the stages, combined with the brutal uphills, meant my legs kept turning to jelly when getting back to running. Towards the end I was getting tired and then, with only 3.5km to go disaster struck!

Stage 8 was a narrow gravel trail and I flung myself on the downhill, only to lose my footing and go cartwheeling head over heels. I bashed my entire left side of my body on the ground and eventually came to a stop with my face in the gravel and dirt in my mouth. OUCH. I must admit I shouted a very loud 'f' word here. Luckily a lady behind me helped me up and Hannah and Kev who were running with me were just behind. Hannah patched me up and we kept on moving to the end of the stage to get some water to wash my wounds. Urgh. With only 2 stages left to go I decided to just keep going and get to the end and sort myself out then. The next stage was the one I was most looking forward to - 800m of downhill - but after my fall Hannah and I took it very very steadily. By this point I was really really tired and sore, and couldn't wait to get to the finish line. And then soon enough we were running back through Endcliffe park and towards the finish line and a brilliant large medal come bottle opener! 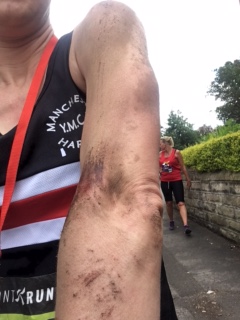 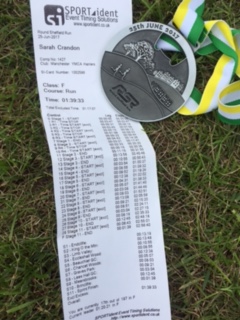 On return of your fob you immediately receive a print out telling you your overall running time and your current standings. I came 17th lady with a running (and falling) time of 1.39 which I was pleased with. I spent a whopping 1 hour 17 minutes between stages!

The end of the race was like a mini festival, with a bar full of delicious (and strong) local craft beer, a pizza tent, deckchairs and music. It was ace and an absolutely brilliant atmosphere. I also bumped in to Bibi from the Veggie Runners which was great, and who had also really enjoyed this race with a difference - we were both so excited at the end! You truly meet some fab people through running.

We continued with beers and pizza for the rest of the afternoon and had a very jolly train ride home. It was a really fun race, despite the hills and the road rash I collected on the way, and would recommend it in a heartbeat. We're already plotting next years return.

Posted by CrandonRuns at 14:25 No comments: