The Marathon du Medoc has been on my list of dream races for a long time. 26.2 miles running through the French vineyards, with 23 wine stops, cheese and even oysters en route - that's basically all my favourite things rolled in to one amazing event - what's not to love?!  This year we were ready and waiting for the entries to open and I managed to get a place, along with running pals Jill, Emma and her husband Jonathon, from the Harriers.

This race is like no other. Seriously, it is really difficult to describe. Forget everything you know about marathon running. We committed all the pre-race sins; wine and heavy food the night before, a mere 4 hours sleep, running in an outfit we'd not practiced in, and very very MINIMAL training (the most I ran in 'training' was 14 miles).

Annoying flight times and schedules meant we had a long drive the night before to race HQ in Pauillac, to collect race numbers and wristbands for the coaches the next morning. The long drive did however mean we got a glimpse of some of the Chateaux, vines and roads we would be running through the next day, and they were beautiful. Race HQ and the little town of Pauillac was teaming with runners and the atmosphere was already really fun.

5am the next morning I was waking up and putting on my Bowie face paint with very bleary eyes. Each year the race has a theme and as this was the 33rd event, this years' theme was 'Music in 33RPM' or vinyl music, or to a lot of people just 'music'. And to some people, just 'costume'! As well as Bowie, other costumes in our group were 80s Madonna (Emma), her gay boyfriend George Michael (Jonathon) and Jill stealing the show as Nirvana's 'Nevermind' album cover, complete with toy baby and dollar bill. Throughout the run people kept making sure her 'baby' was OK and needless to say we took lots of pics of the baby drinking wine! Brilliant. 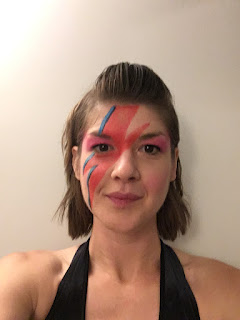 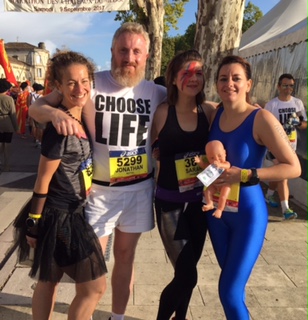 As the town is so small we stayed in Bordeaux and pre-booked our coaches to take us to and from the race. These left at 0630 but did gave us a chance to eye up all the other costumes. Our bus had Elvis, The Beatles, and a VERY skimpy Cher to name but a few. That's another thing, prepare yourself for a lot of nudity in this race. I have never seen so many naked men in one day, one man even ran it nude apart from his race number covering his bits. Bold.

The start line was basically a giant street party. Everyone was really excited, checking out costumes, taking photos and dancing along to the live band who were playing from a hanging stage above the start line. It was great! 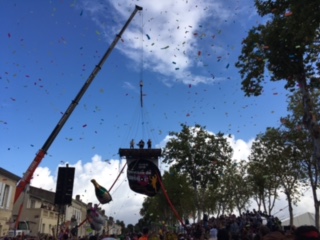 And then with a shower of confetti we were off, walking, running and chatting our way merrily onwards. A mere 1k in and the first wine stop arrived - a pour your own job that set us up for the rest of the race. About 2k saw a big bottleneck as an 8500 throng of runners attempted to make their way through the tiny french villages. Before the race we all had grand plans - 'no drinking until 25k' and 'stopping and dropping out at 10 miles' were just two from our group but in reality these would never happen. It was just too fun and there was no way you could actually run the first few miles without stopping, unless you made sure you were way up front - it was just too crowded and way way too much fun. I think running the whole thing and not getting in to the spirit of the event really defeats the whole object of the race. There are plenty of marathons to run for a good time on the clock, we were here for a good party!

We clocked 5k in a ridiculously slow time of 54 minutes, but by this time we were already two if not three wines down. It was 1045, the sun was shining and we were running through rows and rows and beautiful french vineyards. Life was good and we weren't even halfway. But take note, among all the fun there is no time to dilly dally in this race. The sweeper cart is always just over your shoulder, bringing up the last of the runners with their anxiety causing whistles and the 'brooms of doom'. This cart travels at the back of the race, sweeping up the late runners and basically makes sure no ones overstays their welcome at the numerous Chateaux wine stops. You have to stay ahead of the brooms and a word of warning, they are really strict on the time limit of sub 06:30:00. At the finish line, they scan you and if your chip time is over the cut off, no rewards for you! 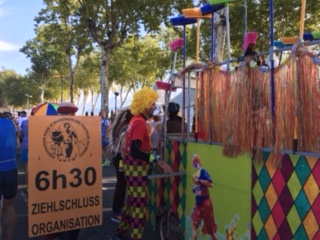 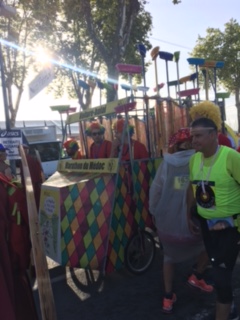 The brooms of doom

Our group soon settled in to a rhythm with Emma and I trotting ahead to the wine stations to grab four glasses of wine ready to greet Jill and Jonathan with our arms and wine in the air. On arrival at the wine stop Jill would stick her baby in the air so we could spot them - seriously, this baby was brilliant, and soon became our mascot! We would meet up, drink wine, and go again. Occasionally we got too cocky, messing about in the vines, grabbing two maybe three glasses of wine at a stop, chatting too much, and basically messing around. Until we saw the brooms of doom on the horizon which prompted us to get a wriggle on!

From about mile 16 the wine stops began to come thick and fast. By mile 19 we all agreed we were pretty drunk, but merrily marching onwards. The weather did it all, brilliant sunshine, rain storms and at one point a massive hailstorm which let me tell you is not easy to run through, uphill, in a catsuit, protecting your Bowie makeup whilst holding a glass of red. We chatted to runners on route and marveled at the amazing costumes and carts. We made friends with runners carrying and pouring their own wine (naturally) and had way too much fun with an oversized bottle of wine and photo frames hanging from trees. All along the route there were also water stops and loads of fruit, crisps, crackers and chocolate available. It was brilliant and although we all felt drunk, I didn't see anyone really hammered, apart from the naked man. Everyone was just in very high spirits enjoying the race. 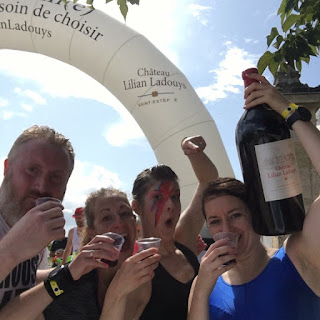 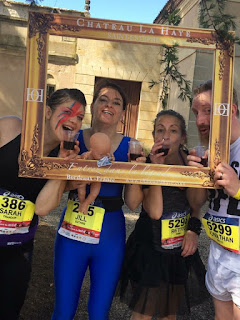 Come mile 22 the stop-start running, the heat and the distance all began to take their toll and the last four miles were pretty much a death march to the finish line. Through oyster stops, ice cream and randomly, corn stops we trundled on and just could not wait to see that finish.

And finally as we came back along the water front in Pauillac we could finally see the red carpet and vinyl balloons leading us to the finish line. We crossed the line as a group together, drunk, tired but oh so happy. And I'm pleased to say we made it with a minute to spare in 06:28:54. Perfectly timed!

We grabbed our medals, record shaped marathon bags and of course commemorative boxed bottle of wine from one of the various Chateaux en route. We were elated, so of course celebrated with a much needed...beer! No more wine for us for at least 12 hours.

My 6th marathon was my worst time in numbers, but undoubtedly the best time I will ever have running a marathon. Running with our little gang together was just so much fun and we are already planning our return trip.