50 and Fabulous (parkrun that is)

My first ever parkrun was on the 3rd Jan 2015. I was a bit nervous before I went and had no idea how they actually managed the timing system! I ran there, worried I wouldn't be able to chain my bike up anywhere (doh!) and ran it alone. I loved it! Everyone was really friendly and it felt good to have done my run so early on Saturday morning and I knew I'd be back, despite having gone as a 'new year resolution'.

Two years on and a new parkrun has become my local, which in turn has become a bit of a social event in our running club's week. We often meet up there for a quick hello pre and post run; incorporate it into part of our individual long runs on the weekend, or use parkrun as an excuse to go for a team breakfast afterwards. Lovely.

My fiftieth run was really fun, despite being treated to typical Manchester August weather - it absolutely chucked it down on my run there. When I finally arrived, soaking, I was met by my running buddies including Chris who as also running his 50th and his lovely wife Jen who had '50th' balloons for us both. We ran together with more of our running club and had a nice chat and a catch up - it was really social and loads of people congratulated us on our 50ths on the way round. It was so nice. Running with a balloon in the soaking rain with your pals is actually pretty fun, and we all agreed that running at a sociable pace having a chat made a nice change to almost puking in the finish funnel after running your heart out trying to get a PB.

In a bizarre coincidence it turns out I ran my 50th in EXACTLY THE SAME TIME as I did my 1st two and a half years ago, with a time of 23:53. Insert spooky music here....

Post race most of the gang went for a celebratory coffee, but I continued on my long run as it has dawned on me I have a marathon to run in less than three weeks. Oops. Anyway more on that soon.

As always, parkrun was a great way to start the weekend and celebrating our 50ths was just fabulous. 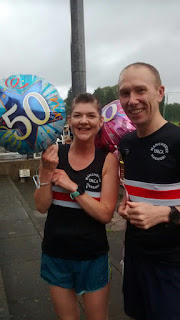 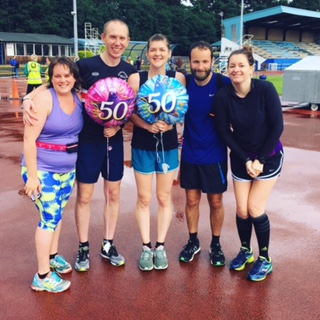