One 24 hour race, one 10k route, 8 team members, very little sleep, countless brownies and bags of fun, is basically the best way to describe my weekend at Equinox 24.
Starting at 12pm Saturday and running, literally, right through to 12pm Sunday, Equinox is a race where you run as many 10k laps as you can during the course of 24 hours. You can enter as a solo runner (if you’re mad), in pairs (see previous), a small team up to four, or a large team up to eight members.

Our team of eight was mostly made up of YMCA Harriers and we were definitely in it for the ‘fun’ aspect. But you can’t help get caught up in the friendly competition and we soon found ourselves discussing tactics, midnight running and tactical running orders.

We decided to try and have someone on the course throughout the whole 24 hours which we did, and we were excited about running at night in the pitch black. Well, excited and a little unnerved.

The course, camping and race HQ is all set in the grounds of the beautiful Belvoir Castle in Leicestershire and as team captain I was chosen to get us underway at the 12pm race start. The atmosphere was brilliant, with a separate 10k race also starting, as well as all the soloists, pairs and different teams for the mass start. I heard my team cheering me on as I went over the mat, and we had finally begun our 24 hours of non stop running! It was exciting!

But that first lap was my least favourite – the course was challenging with a long incline, another very steep hill labelled ‘THAT HILL’ and a mixed terrain of uneven fields and roads. But it was mostly the heat that I didn’t like, it was SO hot! But this was a good thing for the rest of the event. It would have been pretty miserable in the rain.

I packed so much running kit to make sure I always had a new clean clothes to run in, as well as dry trainers in case of rain, and many (many) possibilities so I was covered for all weathers.

After that first lap I developed a little routine which saw me through the rest of the race. Hand ‘baton’ over to Mark who was next in line and waiting in a little area along with all other waiting runners just after the finish line. The ‘baton’ was a very retro 90’s style slapband. Brilliant. After heading back to the tent, I’d shower (or wet wipe wash!) then change into my next clean kit all ready to go for my next lap. This seemed like a good time to get some food in me and then we'd carry on cheering for all the runners.

It was an incredible atmosphere and the next cycle soon came around again. The second lap was my absolute favourite. I managed to get the sunset lap and it was pretty special running around such a beautiful location as the sun went down. I also preferred running the course once I knew what to expect, and the cooler temperature made me a much happier runner. The only thing which ruined this lap was a girl singing 'Don't stop believing' at the top of her lungs, so I ran quicker to get away from her. There was also a wedding going on within the grounds that day, so after catching a glimpse of the bride and groom and yelling a very sweaty ‘congratulations’ at them as I ran past, it was back to the finish to hand over to Mark again and before more food and even a beer. 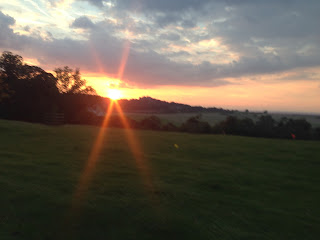 I managed to get about an hours sleep before my next run at 1.30am. It was such as odd feeling, waking up to go and run in the dark. Our team worked really well as there was usually always at least three people up and around; one who had just finished a lap, one out running and one who was next on the course. It was nice to always have someone around to keep you company before you set off and to have someone there when you returned feeling all excited and giddy from your momentous run. The atmosphere was still great during the wee hours with people milling around near the finish line waiting for their change over or returning triumphantly. Back at base you could hear other people waking up their team members in their tents.

Although I've been out running in the dark before, I was a little apprehensive about my night run. But hearing good reports from my team mates after they'd already experienced it put me at ease a little and soon enough I was off venturing into the dark fields. Little glowsticks marked the way but it was still pretty alienating and felt like a whole new route. Often you were by yourself but you could always see a little glimpse of a headtorch up ahead and the course looped back on itself so you never felt totally alone. The steep downhill was a little scary in the dark and you simply had to run at a slower pace as you weren't as confident. I really enjoyed the experience though and was really glad I'd done it.

At about 4am I managed to get to sleep for about 2.5 hours before waking up again for my morning run. We had worked out we'd need four of us to do a fourth lap and I was really keen to run again. I felt like I needed to run during the day on Sunday to complete my experience and liked knowing I'd run just 2k short of a marathon over the 24 hours. The last lap I was shattered, but knowing it would be the last one I wanted to enjoy it one last time and soak it all up. The last handover to Mark was brilliant with him dancing around the waiting area beckoning me in, and then that was me done! I celebrated with a shower, a massage and an almighty bagel loaded with peanut butter and banana while cheering on the rest of the runners. Followed by another beer. It was great. 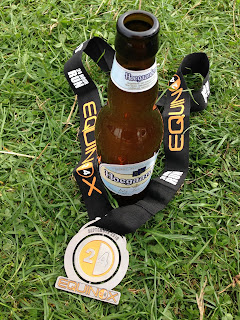 You can't really put into words how good the event was, or describe the atmosphere. Out on the course the camaraderie among the runners was great: everyone said well done to each other, and the support for the soloists throughout the event was great, as we all thought they were mad and were in awe of them in equal measure. With Chris setting out on our final leg at about 11.40am we all cheered our heads off as he came in. That was it - 24 hours and 29 laps later and it was over! But not before learning we'd come in 9th in our category!

The organisation was brilliant. There were just the right number of portaloos and showers and they were crucially, really well maintained and cleaned often. There was a bar on site and loads of different food offerings, including pizza, jacket potatoes, fish and chips and a much needed and lovely coffee stand as well as others.  We also chose the 'glamping' option which meant no need for wrestling with tent pegs and dealing with leaky tents in the middle of the night.

All in all it was one of the best weekends of running I've had. Brilliant atmosphere, great organisation and truly loads and loads of fun.