A few weeks ago I ran the Cardiff Half Marathon. Although not my first half marathon, it was a first for me in many ways. It was the first time I'd run in my hometown, first time I'd run the same race as my super speedy Brother in law, and it was the first time my mum, sister, boyfriend and nephews had been to watch me race. And it was amazing, the sun was shining, the route was great and the organisation was fab too. I even went as far as to say this was my favourite that race I'd ever run. And the medal from my hometown wasn't too shabby either.

So without further ado, I introduce you to my Cardiff Half 2013 Race Report: 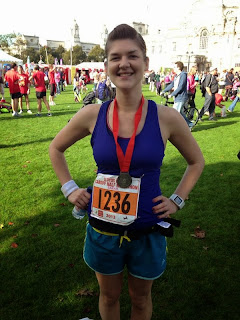 Race Organisation
Good! I had heard reports that in previous years it hadn't been that great, but the organisers had clearly listened to their feedback. The communication via email leading up to the day was full of useful information and Race numbers and chips were posted out to runners so there was no need to collect these on the day, which I much prefer.

The start was well organised and it was clear where each colour wave should go. Lots of volunteers were able to help if you had any questions, and most crucially there were plenty of loos near the start which didn't have massive queues! The only problem was finding somewhere to park, but apart from that it was all pretty straight forward and hassle free.

Starting Location
You can't really get a more iconic location in Cardiff that the Castle. The early morning sun was shining and the start line was buzzing, even if I did feel like the only lady surrounded by big burly men!
In previous years, the race has started in the bay and again the organisers had listed to problems runners had had with this, and moved the location. I thought it was a great place to start, in the centre of town outside the Castle entrance, and this set the tone for the rest of the race.

Route
Maybe it's because I know the city so well that I enjoyed it so much, or maybe I'm just biased, but either way I loved the route! I love running Cardiff when I'm home visiting my Mum and this race really did our city proud. The route takes in all the sights, from the castle, out to the lovely Penarth Marina, over the barrage and into Cardiff Bay, past the Norwegian Church and the Millennium Centre before heading through studentsville and over to Roath Park and then back to the Civic Centre finishing not far from the National Museum of Wales.

Despite billing itself as the second largest half marathon in the UK, it's worth a note that there was little congestion on the course. Sure, it was busier in some parts than others, but there was plenty of room for everyone. The best part of the course was through the bay and Roath Park, where the support was best and the atmosphere was great. I also love running near water and greenery (it's rare up in Manchester!) The most challenging part of the course was between miles 11 and 12. You were almost at the end and then you turn a corner, just to see the mile 12 marker. Good right? WRONG. That marker is sat at the top of a short, but very steep incline. I looked at the guy next to me, we both swore a little, laughed and got on with it. The little old lady cheering me up that hill was the best!

Crowds
I have never ending respect and appreciation for people who get up on a weekend and give up their time to cheer on strangers when they run. From the students stood on the street in their pjs in Roath, to the little old lady cheering me up that hill, and of course my own special cheer team, Mum, Katie, Jamie, Dafydd and Jonah - the support was brilliant. This was especially true of the bay and through Roath but the whole route was well supported, particularly the crowds at the end. Great stuff. 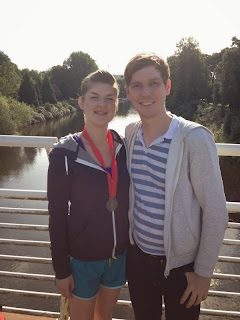 On Route Drinks and Snacks
There were plenty of water stations, and again lots of volunteers were on hand to give out bottles to us thirsty runner. They also handed out gels, which I didn't use, and there were lots of people handing out jelly babies which are always well received!

Official T Shirt
As always, this was a little on the large side despite me getting an XS size. I mean, these are being given out to people who run - its safe to say we are not all gargantuan, yet race Ts are always huge! But its a good technical Brooks shirt, nice colour and I'm sure I'll wear it when I'm layering up on my runs in the winter.

Medal
A round, gold coloured medal depicting the mighty Cardiff, with a red ribbon. Some lovely race bling.