It is no secret the I love the London Marathon. Like, really really love it. I've done it three times now and it is just the best! I love the circus that surrounds it, the TV coverage, the anticipation and of course, the amazing crowds. Last year it gave me my first Boston Qualifier time, but I knew I could run faster, so this year I decided to try something I'd been toying with for a while: I decided to run two marathons in two weeks.

My plan was to get the time I'd been working for at Manchester Marathon, and then use my GFA place to also run London for...you know...fun! A type of celebratory victory lap if it all went well in Manchester. So after securing a PB of 3.30 two weeks ago, my aim for Sunday in *that* heat was to just enjoy myself. Something I had to keep reminding myself of mid run.

So how was it? Well in one word HOT. In two, hot and hard. Really really hard. Definitely the hardest race I've ever done.
Running for fun is great and Saturday night before the big day I felt really chilled. The only stress I really felt was when I realised how relaxed and unfocused on the marathon I was. Sunday morning, I made my way to the Green start and found some shade to stand in while I waited to get into my pen. I knew I'd be in the sun for far longer than I'd like whilst running, so didn't want to be in it waiting to set off too. Even walking across Blackheath before 9am I was warm, and was dressed just in the shorts and vest I was running in. Certainly no need for extra clothes to keep warm at the start this time. I made my way into my pen and bumped in to Sarah of Goldilocks running. Having chatted back and forth all week we suddenly realised we were stood right next to each other waiting to set off. We had a little chat and before we knew it the Queen was on the big screen and pressing that button to get us started.

As always it was busy, but the heat was there even from the start. I was so glad I'd made the last minute decision to stick my visor on. At 4 miles I thought, 'there is still 22 to go!' This was remarkably different to Manchester when I couldn't believe we were already at the 18 mile mark. That seemed a looong way away this time.

I ran on feel and started off at about 7.45 minute miles which I knew was too fast but I knew I'd slow down in the heat and so figured if I wanted to run at that pace at that moment I could! I was glad to get to Cutty Sark and see Jamie at our designated lamppost in Greenwich around 7 miles, but after that Tower Bridge seemed like a lifetime away. I usually find the first half of the marathon fun and passes quickly, but I really found myself mentally challenged from around this point. In a way running without a 'goal' other than to enjoy it, was really tough especially on a baking hot day. At times I wondered why I was doing it. Although there was no time pressure, this also meant there was nothing to focus on and dig deep for. I found this really hard. I decided my goal was to get a GFA time in sub 3.45. During the race my goal varied depending on how hard it got. Other goals included: finish without stopping, finish in one piece and just GET THAT MEDAL. I'm glad to say I managed them all.

As we turned the corner to Tower Bridge my spirits soared. It's always just so amazing running over it and always gives me goosebumps. I figured this was the race to get a selfie on Tower Bridge so I whipped out my phone and soaked up the cheers from the crowds. It was brilliant as always. There really is no other feeling like it, it's like you're a running rockstar and everyone is there just for you!
People were really affected by the heat and I saw a lot of runners needing help and support on course. It was hard to keep your head in it all and really worrying too. My tactic was to grab a bottle at every water stop and either take a sip or swill my mouth out, and then drench myself with water all over. Whenever a little patch of shade appeared everyone ran over to that side of the road, and I was glad I had slapped on my factor 50. Sunburn AND marathon legs the following day would be too awful!

I knew my Harrier pals were on the course at around mile 14 so I focused on getting to them. They were leaning over the barriers screaming their heads off and I soaked it up, waving and blowing them kisses! Seriously anything to get you through! The race then became 'just get to your next supporters'. I was once again so thankful to have Jamie at all our usual spots on the course. I really wanted to walk and thought I would get to mile 17 and stop and see Jamie and our friend Catherine and tell them how hard it was. 'Just get there and you can walk' I promised myself. But then I realised that they wouldn't allow that and would urge me on, and if I did walk it would just prolong the race. So many people were walking in the heat and the buildings of Canary Wharf offered little shade.  The run became a real battle but my spirits were high-ish.  I ran through every shower rainbow, waved at everyone who called my name and smiled at all the cameras I saw. The miles took ages and even at mile 24 knowing there were just 2 more miles to go didn't help. The support as always was amazing though. I smiled and waved and thumbed up at everyone who cheered for me. I read somewhere that smiling when you're in pain really helps and I did this A LOT on Sunday and I can confirm that it works - it does lift your spirits! The crowds always help push you on in a marathon but on Sunday they were a lifeline and I was so lucky to have supporters all along the course.

Finally I was at mile 24, 25 then I saw Big Ben and soon there was just 800m to go. I pushed as much as I could, raised my hands in the air and ran over the finish line. A medal was hung around my neck and as usual I burst into tears. It was done. I was elated with a GFA of 3.44.04 especially in the heat and just two weeks after PBing at Manchester.

London you were amazing as always, but goodness you were a hot little challenge this year. 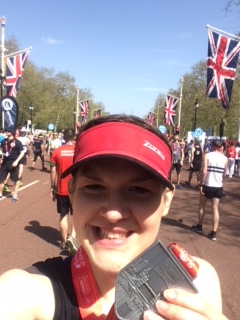 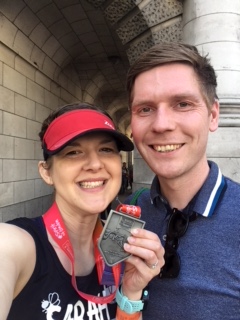