My only real regret in life is not taking up running until AFTER I lived in New York for a year. Had I been a runner back then, I would have entered the New York marathon and have already ticked this off my race bucket list, as well as been able to explore all the fun of NYC during many running adventures. What a fool I was - too busy eating and taking part in happy hours instead...although this was also very very fun.

I love running when I'm on holiday and my running kit is always the first thing I pack. So when we booked a week long trip to NYC I was on the lookout for a race to run while I was there and came across the NYRR Mini 10k - the original woman's only race through Central Park. BINGO.

I was so excited. I had to collect my race number and race t-shirt (as an aside why do overseas races always give these to you before you run? I find this so odd - why not get it at the end?!) from NYRR HQ on West 57th St - or as I like to think of it, 'Runner's Mecca'. This was a very slick process and took all of 3 minutes to get my top and bib. Also at HQ was a full route info, a shop, lockers to leave your stuff in while you go for a run (brilliant idea) and a full display of all the NYC Marathon medals to date. Awesome! It was also pretty interesting as a Q&A with the elites was going on while I was there. That's right, this wasn't some little piddly race, no this was circa 9,000 ladies running through Central Park led by a horde of Olympians and elites including Mary Keitany, Edna Kiplagat and our very own Jo Pavey.
The race started at 8am which I was pleased about not only because this meant minimal holiday interruption and the promise of a post race breakfast, but also due to the heat. We had inadvertently stumbled across a New York heat wave and it was hot. Like REALLY Hot. One day it was over 35 degrees when we were there. Sheesh! I'd previously read that there were usually a healthy amount of portaloos at US race starts, and I was not disappointed. No queuing and worrying that you'd still be in the loo as the gun went off. No no no! This is America folks, toilets for everyone! You literally just walked up to a bank, opened the door and hallelujah! Welcome to the cleanest porta-potty you've ever seen. Take note UK races. Seriously.

Mandatory loo stop done, I waved goodbye to Jamie and walked into pen B which was located right outside Trump Hotel on Central Park. Urgh, oh well you can't have everything I suppose. This starting pen was really rather daunting. Over 8500 women completed the race that day and I was only seven rows behind Jo Pavey on the start line. I could literally see her face and pro elite running pants. So that was scary. However there was a really friendly atmosphere at the start, with everyone chatting away to each other and looking forward to the run. After a speech from the first winner of the race in 1972, followed by a rendition of the National Anthem, we were off!

The course runs up Central Park West until 91st Street when you then turn right and do a huge lap of Central Park. Running on the quiet closed New York streets was great, and I saw loads of museums and galleries I'd not seen before. It was quiet as it was so early but once into the park the opposite side of the road was scattered with folks running, cycling and cheering us on, for a lot of the route. It was great! But hard. I hate a 10k usually as they are so long to run so fast! But this was also hilly. I hadn't really realised Central Park contained so many lumps and bumps and this combined with the heat made it really hard work. But, I couldn't stop thinking how brilliant it was that I was running through CENTRAL PARK! How terribly exciting! The atmosphere around the course was great with everyone shouting words of encouragement - 'You got this', 'Great stride' - all very american. I was pretty near the front at the beginning of the race and could see the timing car until it turned into the park, so the course wasn't at all congested where I was and I had plenty of room to struggle up the hills and fling myself down the descents, with just a few ladies around me. 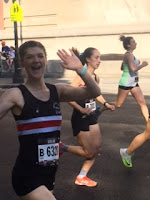 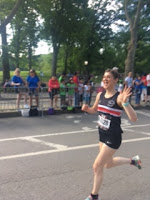 The miles ticked by really quickly and soon I was on the home straight, with Jamie waving and shouting my name! Then it was over the finish line with a shout out over the tannoy in 43.10 and 80th place. Not bad. I was given a hug and my medal along with a flower (random), some pretzels (genius) and a big pink bagel (perfect). All in all it was a brilliant race and I would definitely do it again...it was a really fun part of my holiday and running through Central Park was just brilliant.