After the baggage issues at Manchester Marathon earlier this year, I was in two minds about running the inaugral Manchester Half Marathon this weekend. But as it's on my doorstep, and the final race in my running club's Summer championships, I thought I'd still give it a go despite my reservations. And boy am I glad I did!

Having had a good run a couple of weeks ago at the Disneyland Paris half, finishing close to my best half marathon time, a little seed had been planted and I decided I was going for a PB. I have been running pretty well recently and running faster and longer in training than I'd really realised, so I thought I'd try and go out with a bang at the last road race of the season. And if I didn't get it, I had nothing to lose.

An early alarm gave us a gorgeous sunrise, but this wasn't to last. I checked my stuff into the bag drop, met up with my running buddies and we made our way to the start line. Just as the race began, the rain started to fall and in true Manchester style it didn't let up for about 6 or 7 miles. It was WET! But this didn't deter the crowds and I felt more sorry for them than us runners - as least we were moving and keeping warm! The race was well supported throughout with choirs and bands along the route. An out and back section towards the end also meant you saw supporters twice which was great.

I set off pretty fast, too quickly really, but I'd decided to run without my running watch after I'd enjoyed it so much in Paris, so I didn't really know how fast I was going. I liked running on feel and realised that the 1 hour 35 pacer hadn't yet overtaken me which was both nice and worrying in equal measure. Then right at the 9 mile mark, just as the going got tough, that pacer effortlessly glided past me. Although this was much faster than I was aiming for it was still really disheartening and I thought I'd totally lost my chance of a PB. I tackled the rest of the race just trying to run as fast as I could. There were a few little inclines which were not what I needed after 12 miles of running hard, and I felt like a lot of people were overtaking me towards the end, probably because I'd started in a faster group than I should have. But I just kept telling myself to keep going. 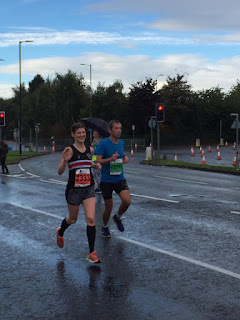 Soon enough I could see the finish line, but it was AGES away and took me forever to get to. I was happy with my run and felt like I was giving it my total all. I couldn't go any faster - until I saw the clock. It was SO close to my PB time that I couldn't not pick up the pace. Feeling sick and really going for the last 100 metres I finally ran over the line with a new PB of 1.36.59!

It was tough, and the course wasn't the most scenic, but the atmosphere was great despite the weather and the organisation was really good (apart from the lack of portaloos at the start!)

A good run, well organised race and a shiny new PB - not bad for a Sunday morning's work.