6am raving with Gloryville Manchester

It's been a long time since I've seen the wrong side of 6am - my days of drinking and partying until long after the sun came up are very much over and have been left in my (rather too late) twenties...

But this morning before work, I found myself at an actual real life rave....albeit one fuelled by coffee and smoothies after a full nights sleep, rather than alcohol and partying on through to daylight.


I'd been invited by Gloryville Manchester to experience their pre-work sober clubbing experience and 'rave my way into the day'. They are on a mission to shake up the usual morning routine and get people dancing before their working day.


I'd arranged to meet some girls from running club there at 7am - not your usual social engagement hour but as runners we're no strangers to doing ridiculous things and often find ourselves in situations asking each other 'what are we doing?!'  This morning was no different and this thought was certainly going through my head when my early alarm went off. But as I got dressed in my loudest running gear, I was feeling pretty excited! I had no idea what to expect but on arrival at one of my favourite bars, Gorilla, I was greeted with a hug and directed through to the dance floor.

Once inside you could have mistaken it as a club night still going strong. The dance floor was full of people and more ravers arrived as the morning went on. The music was loud and the coffee was strong. People were dressed to the nines; sequins, glitter, head dresses and light-up hoola hoops were all on show, and we cracked out the face crayons and sunglasses, and partied on stage. I bumped in to a couple of yoga friends and everyone kept agreeing how mad it was and how much fun we were having. 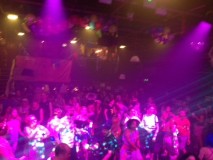 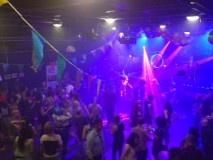 The event blurb promised 'music, dancing, dress up, super food breakfast, smoothies, coffee, yoga and massage'. The yoga seemed to be just a few mats on the edge of the dance floor for people to practice on but not a teacher-lead class as such - whilst the super food breakfast, smoothies and coffee were all at an extra (pretty high) cost - which for £16 on the door I thought was a little steep (advance tickets were £10-£16).


I like doing things a little out of the ordinary and waking up early to spend over an hour and a half dancing your heart out with your mates first thing in the morning, is a brilliant way to start the day. It was mad, and we kept saying so. As Jill pointed out, it was better doing this sober! We revelled in the craziness and felt really energised. I noticed people occasionally glancing at their watches while on the dance floor, almost forgetting that we all had to work to go to.

Stepping outside into the morning light while people were making their way to work was similar to my long gone clubbing days, although instead of an almighty hangover already kicking in, I left to make my way to work with an enormous grin on my face, feeling like I'd been let in on an almighty secret. A rave for breakfast is the way forward.

I was invited to go the Gloryville for free and they knew I would be blogging about them.