Last night was my running clubs annual AGM. As well as a look back at the club's achievements, this is also the night where two trophies from the past year are awarded; the Benidorm Cup, for Best Overseas Achievement and the Morris Kaplan Trophy for Most Improved Runner.

The former was awarded to Jill for her stellar achievement of completing her first marathon in Paris a few weeks ago. She promptly and heroically filled it with gin. The second was awarded to little old me!

Although we recognise and revel in our PBs when we get them, it's not often that we stop and take stock of our full achievements. It was only when our captains, who decided on the recipient of the award, mentioned it in the prize giving that I realised I'd recently gotten PBs in at least three distances this year; 5k, half marathon and the big one, the marathon.

This wonky trophy might look like it's been sat on or dropped on the floor, but it's been around since 1968 and clearly been very loved! Or maybe someone did actually sat on it after a few beers....who cares?! I've only been running with the Harriers for a year and a half, so I feel very honoured to be recognised among some pretty amazing runners. 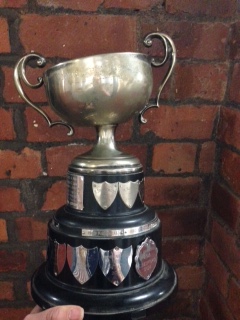