I moved to Manchester about four and a half years ago. Yesterday, I ran my fourth marathon, 26.2 miles through the streets of my adopted home city and had a total blast - coming in at 3.40 with an 11 minute PB to boot.

The week before the marathon the nerves began. Despite a great run at the Cardiff Half World Marathon Championships (where I ran a PB of 1.37) a couple of weeks before, I began to doubt myself. I felt sluggish and full during my taper and I felt like I'd forgotten how to run. Oh, how the taper plays with your mind.

I had decided pretty early on in my training that I was aiming for 3.30 and a Boston Qualifying time, and in the week before really began to feel the pressure. Thankfully a couple of days before the run I had an epiphany and realised that I was the only one putting this pressure on myself, and that if I didn't get it in Manchester then I could just bloody well try again next year. After all, my marathon PB stood at 3.51 so this jump was a pretty big ask.

Phew! Once I realised this, I relaxed a bit and began looking forward to getting out there, enjoying myself and seeing how my training would pay off.

The day of the marathon arrived with a glorious sunrise and I felt like a kid at Christmas, all full of nervous excitement. After dropping my bag off and popping to the toilet three times (just to be sure) it was time and soon we were off! I was actually running another marathon! The first few miles were congested and my legs felt a bit heavy and tired, but I was bang on for the 3.30 time on my pace band and I enjoyed the atmosphere and running through streets I knew.

As always my champion supporter boyfriend, Jamie was at multiple stops on route and I almost tripped someone up running up to him for a quick kiss around mile 9 - sorry about that runner! My brilliant running club pals also traveled all over Manchester by bike so I had lots of unexpected cheering posts along the course which was brilliant. I even saw my physio Trev at around mile 23 - at which point I REALLY could have done with an on route massage.

The first half of the race was fine and pretty uneventful, I was just enjoying the run. Through Sale the crowds really increased and I was looking forward to getting to halfway. At this point it was still pretty congested and the sun was getting stronger. The strong breeze was a welcome relief and thankfully there were loads of water points along the route. By about mile 14 the dream of 3.30 began to slip but around mile 17 I was still on for about 3.32/34 which I was happy with. I actually couldn't believe I was already this far along the course, the time seemed to have flown by. By mile 22 however my legs were screaming at me. They were tired and on the cusp of cramping. I kept collecting water at the stations and pouring them on my battered quads which really helped. By mile 23 my new goal was to just keeping running and not stop and walk, which a lot of people were doing by this point. I was determined to run the whole thing and knew I could run it no matter how slowly it felt.
Finally there was less than a mile to go, and after seeing Jamie one last time for a final boost, I could actually see the finish line. But man alive, it was far away! The crowds in the home straight were amazing and I felt like a total rock star as I pushed and pushed and ran over the finish line at 3.40.

It was at this point I promptly burst in to tears as I have done now at all four of my marathons. I put it down to the sheer relief.

A few points to note on the organisation of the Manchester Marathon. Whilst I had a great run, this was down to the support on route and my training, while the organisation left runners with a lot to be desired. The start line was quite far from the race village; the start line was not clear at all, even as you crossed it; and do not get me started on the baggage fiasco at the end. I queued for over an hour for my bag and was absolutely freezing after running, but I know people queued for well over two hours for theirs. The organisation of that was dire. Queuing for almost as long as you ran, with no food or drink or word from the organisers is appalling. I also read online that there were huge problems with parking, and many runners missed the start due to this. It was absolutely ridiculous and really left a bad taste in the mouth to an otherwise great day. I don't know what happened but they really need to sort it out for next year. I'll be astonished if they collect 'Best Marathon' again this year in the Running Awards, they really don't deserve to.

But enough of that. Thanks to everyone who sent me their good luck wishes - they came from near and far, from family, friends and people I've never even met. It was overwhelming. And thanks to everyone who came and yelled and cheered and supported on the day - it is such a boost to have people on the course there as your own personal cheerleaders, and just as important for the post run beer celebrations - it really means so much.

As always after a marathon, my heart is lifted and I feel all in love with the world. 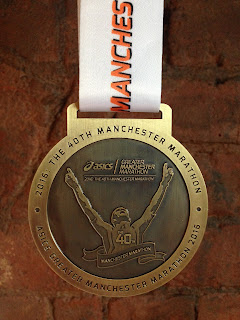