Sure you’ve thought about running a marathon. But have you thought about running one in Snowdonia? Well a couple of weeks ago Gavin did just that, and is here to give us the lowdown.
Last month I ran the Snowdonia Marathon. Not my first marathon, but the first time I’ve ever taken part in this particular one. And with a number of mountains, more than 1000 ft, teamed with the unrepentant north Wales weather, it was sure to be a challenge.
Sarah’s asked me to write a guest blog about the race. Here goes!
So, after thinking about it for a while, Saturday October 26th came a bit too soon for my liking! Due to work commitments, my training prep didn’t go according to plan, I had slight cold kicking in, and a minor hamstring issue and I was about to run Snowdonia marathon for the first time in my life!
Out of the other three marathons I have done over the last eight years, this is the one I felt most nervous and not ready for leading up to the day.  I had major doubts if I was ready for Snowdonia. Two weeks before I had an issue with my hamstring and on the 16th mile of my longest training run, I was ready to pack up and call it a day.  That was until a huge amount of sponsorship came in from my friends and colleagues over the last week leading up to the run.  My chosen charity was The Noah’s Ark Appeal (Children’s Hospital of Wales) and I was closing in on a total of £550!  And with a personal best at the Cardiff Half Marathon a few weeks before (1hr 35min 18 sec) I manned up and got on with it!
So lunchtime on the Friday, ‘Team Lightning McQueen’ (see T-shirt) - my wife Katie and son Jonah and I - headed north from Cardiff to Caernarfon. 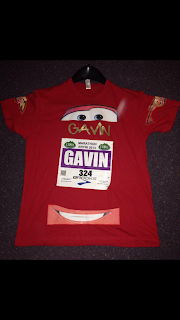 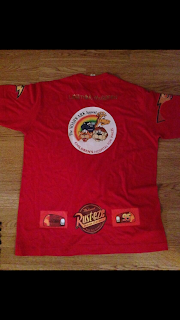 The day before the race was the standard ‘sign in and get your number at the Marathon Expo’…. But it wasn’t the expo I have been used to in past marathons.  Both New York and London hire out a huge arena space for you to sign in and get as many goodies as possible.  Not that I was expecting this with Snowdonia but heading to the local village hall in Llanberis had a slightly different feel.  The look of the hall was similar to a local election voting room, a long row of tables with half a dozen people behind them.  I got handed my shirt number, pins, t-shirt, Hi-5 energy bar and an information booklet (mainly advertisements) and sent on my way!  Outside the cold, wet mountains of Llanberis made me even more nervous especially as I could see the mountain I would need to climb for the last 4 miles!! ….. Nothing to do now but sleep on it and worry about it tomorrow.
So like it or not it was race day,
Race Organisation
My race didn’t get off to the best start. Team McQueen and I arrived at Llanberis with plenty of time to go before the race start, but there was no sign of the start line.  The information booklet I was given the night before stated that the start was a ten minute walk from the visitors centre, without even saying which direction to walk in!   So we asked a few other runners who said to head towards Llanberis Pass and keep walking, you’ll see it!  40 minutes of walking later….. and still no start.  Not even any sort of marker.  We passed two road signs when coming out of the village saying, ‘start line this way’, but then nothing else. Time went on as we wandered around the lake, looking for the line, with other runners trailing behind, also wondering where the start was. Suddenly a gang of runners walking in front stopped and turned to walk back the way we came.  As they went passed they said, “Yeah we have gone past it, its back up there!”  So back we walked for another 15 minutes or so!


As we rounded the corner of the lake we could see slightly more action and a start line being set up, less than 30 minutes before the race was due to start. I understand that the race started at 10:30am and the roads weren’t closed off until 10am so they couldn’t get anything in place for the start, but surely a sign on the lamppost at least saying “Marathon Start HERE!”  Would have been useful? There was also ample opportunity to explain the start location in the info booklet, but instead they used 2-3 pages describing the life of a mountain ranger (!). Anyway we had found it, so after calming down, having a quick wee in the bush and drinking my Gatorade I was ready.  Finally!
﻿ 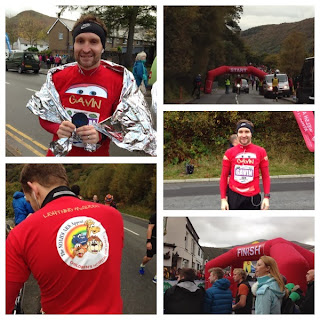 Starting Location
Smack bang in the centre of the Snowdonia mountains, on a narrow mountain road next to Lyn Padarn lake.  And it didn’t look as pretty as Google maps make out on a cold October morning.  I could have done with toilet facilities but as the roads are so narrow I’m guessing there was a lack of space.  Maybe moving the start back into Llanberis village would have been better?

Route
The race started at 10.30am. The route follows the A4086 and climbs to the top of the Llanberis Pass (Pen y Pass 1,100ft).  The top of Pen Y Pass came at 5 miles, it was the toughest first 5 miles to a race I have ever done, which just kept on climbing and climbing along winding roads.  I was thinking to myself, “I can’t keep up this pace on these hills for 26 miles!” Once we reached the top of Pen Y Pass the drop kicked in at the Pen Y Gwyryd junction, the race then followed the old road along to the campsite until it joins the A498. The next 2K were a mixture of off-track (going off-road is something I have never done before), downhill, then the surface returned to tarmac. The route then continued to Beddgelert (200ft) and then continued along to Waunfawr.  We were well into the second half of the race now and an up and down terrain until you get to the mammoth task of the climb of 1,200ft at Bwlch y Groes Mountain, which just kept going on and on.  And when you feel like you’re at the top…..  You’re not and you have another hill to go.  But once you finally get there it’s a mental downhill of grass, puddles, mud and slate until you reach Llanberis and the finish.
Crowds
To be honest wasn’t expecting many people to be lining the hills and mountain roads, but how wrong I was, the support was amazing.  There were of course quiet pockets along the way but people hung out of their windows and stood on top of the highest mountain just to cheer on strangers or family members.  The biggest crowds - apart from the finish - were in the tourist destination of Beddgelert, which was around the half way mark.  The other thing that I haven’t experienced before was the fact that the roads weren’t closed for pretty much the second half of the course, so people were driving past shouting, clapping and pumping out music.  A traffic jam on both sides of the road at mile 20 needed a few side steps in and out of the cars!
On Route Drinks and Snacks
There were plenty of water stations, and plenty of High 5 gels given out at each stop.  The only thing I didn’t like was that the water came in little plastic cups with a foil lid, which made it difficult to drink on the move.  And as usual there were plenty of people handing out jelly babies and oranges along the route.
Official T Shirt
A nice, bright blue t-shirt, with a cool image on the back of the map of the hills along the run. 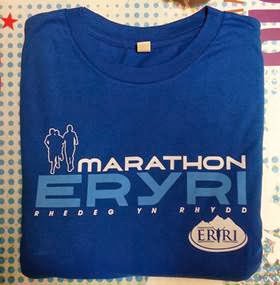 Medal
Something a little different, not a medal as such, but a Snowdonia slate coaster!  Easy to say I won’t be resting my coffee cup on it though, it’s going pride of place in the medal cabinet! 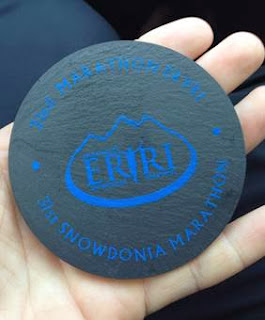 Marks out of 10: 7.5/10
After all the issues with the start and my moans and groans overall the race is an amazing experience  You can’t expect these small mountain roads to totally shut down for the day as bigger marathons do, but it doesn’t matter, it all adds to the race.   There was an amazing atmosphere, especially getting back into Llanberis.  I managed a time of 4hrs 10 minutes which I was very happy with, especially as the last four miles up-hill was spent walking! I don’t think I’ll return to Snowdonia and I’m planning to have a rest from marathons for a while. But if there’s a half marathon I haven’t done before, that might be my next challenge for 2014. But no more hills!
﻿
Posted by CrandOnRuns at 12:30