Five years ago, for me running the Boston Marathon was just a pipe dream. I'd been away for a running weekend to Edinburgh with my friend Ellie and on the long car journey home I'd said I'd wanted to run it. I researched the qualifying times and sent her this message:

I thought I would never get there. After leaving it a little while, then spending three years seriously targeting a Boston Qualifying time, (and getting one twice) on Monday 15th April 2019 I finally toed the start line at the Boston Marathon. Work for what you wish for eh?!

Boston is special. From the moment you land at the airport you realise the whole city has marathon fever. It is EVERYWHERE. Total running geekdom and I loved it.

Although my journey had been a long one of over three years, my training this year had not gone at all to plan. By week 7 I was flying! Training was going well and I was feeling very strong but knew I still had a long way to go to get a PB at Boston. And then injury struck and something odd was going on with my hip. We're still not entirely sure what it was, but with my trusty physio off work having badly broken his wrist, I was left to seek alternative help and did the classic runner thing of pretending I was FINE. I got physio, I carried on running, I got more injured, I did yoga, I got more physio. Nothing helped. In what I thought was the final straw, 2 miles into a very slow 4 miler I called it and had to admit injury defeat. I limped two miles home, angry and in a LOT of pain from my hip and glutes. I was in agony. We'd already booked a trip to a little cottage in Scotland for the following week and I, very uncharacteristically, left my trainers at home and did ABSOLUTELY no running to see if this would help. Frustrated that it didn't feel any better, or worse, after a week off, I did what any injured runner would do and had a big old strop. Another one. Luckily by then my fab physio was tentatively back at work and was able to see me. Phew. He worked his magic and I left feeling a lot better physically and with a new fire inside.

But by this time I'd already missed a lot of training. I knew I could get round the course whilst also knowing a PB was out of the question. But still I looked on the bright side. Sure, I'd only have time now to run one 20 miler before the big day; of course I was mightily under prepared; but I WAS STILL RUNNING THE BOSTON MARATHON. I'd made a decision not to put pressure on myself, NOT go out at PB pace and regret it later with a sufferfest of a run,  and to enjoy the fact that I was running my massive five year goal race! I would leave my ego at bag check and my goal was to finish strong and enjoy this special race. Knowing when its not worth suffering is a liberating lesson that I only wish I'd learnt without getting injured.

So there it was. A plan was in place and off we went to the States. The bright side of the injury meant I could enjoy Boston before the run. Yes please I will have a glass of local beer the night before the race. Yes, thank you lets go and explore and not worry about ruining my precious marathon legs. 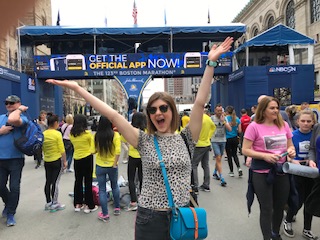 The weather reports the week before had been predicting storms much like last year. I went ahead and packed MANY different outfits for all weather eventualities. The morning of the marathon we were treated to torrential downpours and thunder storms. Im talking rivers through the streets type weather!  I dutifully threw on an old waterproof poncho and made my way across Boston to bag check and to meet Zulma from the Harriers who was also running. It was tipping it down! We screamed, celebrated the fact that today was the day we were actually running Boston, then boarded a true American school bus which took us all the way out to Hopkinton to the Athletes Village at the start. During the ride the rain cleared and it was pretty warm once we arrived.

Once there I was dying for a pre race wee. We made our way to the toilets as had all 30,000 other runners it seemed, the queues were HUGE! Too stressful we decided nature weeing was the way forward. Is there a better use for old space blankets than protecting one's modesty? I think not.

I also met up with running super star Cathy who I've met a few times at other races. We sat in a large damp tent, caught up, had a chat and before too long it was our turn to make our way to the Blue start line. They call you up in your waves and the walk to the start is about a mile away and full of nervous excitement and chatter. It was like being an Olympian! Another quick wee and then it was time to go. This was it! I was running the Boston Marathon!

I had a plan in place which took into account the undulating course. Miles 1-5 I planned to hold back and keep it really steady as these miles are all downhill and I knew it would be easy to get carried away with fresh legs and all the excitement. I happily let people pass as I took it at what I thought was a steady pace, only to note that I was actually running at PB pace - not steady enough! Those downhills are deceptive. At mile 2 a man next to me clocked his watch. 'TOO FAST' he said. 'Me too!' I agreed and made more of an effort to slow down. These first few miles through the towns of Hopkinton and Ashland were great. The excitement was palpable and I had a few little chats with people about the run whilst also appreciating the pockets of support along the route and admiring the American style houses!

Mile 5 - 16 my plan was to keep it steady and by this point I'd decided I didn't really care what pace I was running. I'd read these miles were flat. This is a big fat LIE. Undulating is how I would describe these miles if I was being generous. There was very little let up and the heat and humidity were getting worse. By mile 6 I was mentally struggling a bit but broke this part into little sections: get to Jamie at 6.5 miles; get to 10; get to Halfway; then get to 16. Thankfully it worked. I spied Jamie in the crowd and ran up to him for a quick kiss as we waved and screamed at each other! Rejuvenated I ran on with a spring in my step as a women in front turned around and yelled 'That was AWESOME!' Haha, I know love! 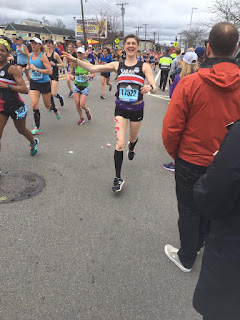 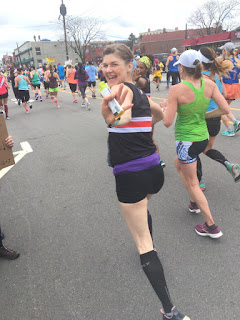 The next big highlight was Wellesley and in particular, Wellesley College. It's tradition for the students of this all girls college to come out in droves to support the marathon and give the runners a kiss. The 'scream tunnel' as its dubbed could be heard before it was seen. Spine tingling, I ran through it realising I would never experience this again, so I lapped it up! I ran over to the side of the road and continuously high fived for about half a mile. I was laughing out loud it was so brilliant. THIS is what marathon running is about - having a laugh and enjoying it! 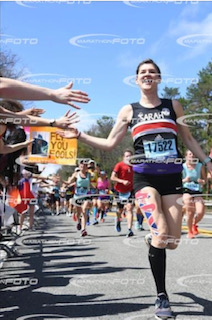 Next goal was halfway. I don't know my splits as I wasn't really paying attention but I knew I'd be on for well under 4 hours at this point which I was happy with. By 16 miles I realised I'd be around 3.45 which I was dead chuffed with after my injury. Miles 16-21 give you the infamous Newton Hills - four hills exactly at the point in the marathon you don't want them, finishing with Heartbreak Hill. I'd broken these miles into 1 easy followed by 2 hard miles which would take me to mile 24. Whilst the 'easy' wasn't quite a true description, breaking this part of the route up like this really really helped. When I was struggling I just focused on getting to the next 'easy' mile and reminded myself that this was one of the 'hard' miles. The hills were relentless, not too steep but so long and unrelenting and by this time your legs are so so tired. I lost count of the hills and as I pushed myself up and up I wasn't sure if I was on Heartbreak Hill or not. Thankfully at the top a woman held a sign saying 'Heartbreak is behind you'. The relief that I'd made it to the top, that the hardest miles were behind me, combined with a woman looking me right in the eye shouting 'SARAH YOU GOT THIS!' made me truly well up. The emotion! I gave myself a good talking to, swallowed down the lump in my chest and told myself I could cry at the finish line, but not yet. 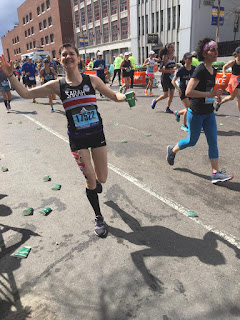 From here it was the home straight and mostly downhill which sounds great but I knew my quads wouldn't like it too much at this point. Luckily from the Newton Hills the crowds really increase and they definitely carried me through the next few miles. I knew Jamie was waiting for me again at around mile 24 so I spent this entire mile looking for him in the crowds. Just as I was about to hit mile 25 I thought I'd missed him. I was so bummed but realised looking for him had really distracted me for a whole mile so mile 24 went by really quickly! Then as always happens whether you're spectating or running a marathon, as soon as you think you've missed them there they are! I spotted him in the crowd just before mile 25 and ran over to him. This was just the lift I needed and I was ecstatic that I'd seen him and that there was just over 1 mile to go! I saw the enormous Citgo sign, lapped up the amazing crowds and waited and waited for Hereford street and the famous turn into the home straight. Through an underpass and really into Boston now and it's non-stop cheering crowds. Then here it was, the turn!

Right on Hereford, left on Boylston.

I could see the finish line, still a good half a mile away. I kept my head. Kept pushing and then I was into the finish line funnel flanked by stadium seats. This was it. The moment I'd been dreaming of for so many years. Getting there had been years of hardwork and determination. Training for it had been sporadic, frustrated by injury and self doubt. And yet here it was. It was happening. I knew this was the only chance I would ever get to do this so I was determined to enjoy it.

I threw my arms in the air, grinned my head off and ticked over the finish line in a respectable 3.46.

Immediately, I burst into huge sobbing tears as always. 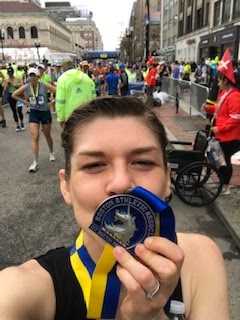