Marathon training makes you do odd things. Odd things to other people, but things that make perfect sense to people trying to fit in training around their life. This weekend I planned to do an 18 mile training run, but I also had a place in the inaugural Manchester Winter Run 10k. I'd seen the London race all over social media last year and was keen to give it a try, so obviously I ran 9 miles there, ran the 10k race and then ran 3 miles home.

So how was it? 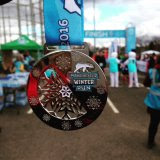 A few races were on offer to runners on Sunday; two 10k waves, a 2,5k and a 5k. Starting near the Eithiad stadium, I was a little apprehensive about the route as previous races I've run there before left a lot to be desired. Whilst this route was better, it was still pretty dull - two laps of a 5k course around the car parks of the Eithiad Stadium, with a lap of the Regional Athletics Running track thrown in for good measure. I've grown to quite like lapped courses as it means you know what's coming and I do understand that these types of route mean little to no road closures, but it wasn't very inspirational.

What did check the 'inspiration' box however was the atmosphere. Pre-race the DJ reminded us runners that ultimately we were running to raise money for Cancer Research, and I realised that the Race for Life and raising money for this charity is the reason why I got in to running in the first place. Essentially the Winter Run series is the winter version of Race for Life, and a lot of people running both the 5k and 10k had chosen this as their first ever race. There was excitement and a good fun atmosphere.

The race blurb promised 'snow zones', polar bear hugs and a ski themed water station (which if you ask me was placed a little too early in the route, especially for the 5k-ers). I didn't really appreciate the fake snow blowing in my face whilst trying to run and breathe - and I found the offer of a sweaty hug from a stranger at the finish line a little odd, dressed as a polar bear or not. But if you're looking for a first race with a fun and inclusive atmosphere, or something to keep your training ticking over in the cold months, then you could do worse than enter the Winter Run next year.

I was kindly given a free place in the run and they knew I'd be blogging about the race.
Posted by CrandonRuns at 13:12