My eyes are now firmly fixed on the Manchester Marathon in April, and my goal of 3.30 is a pretty tall ask for me. That's more than 21 minutes off my PB which I set in London in 2014, so I've had to make sure I train slightly differently than for my previous marathons.

Having just finished Week 7 of my training and almost halfway through I thought I'd take a look at the story so far. 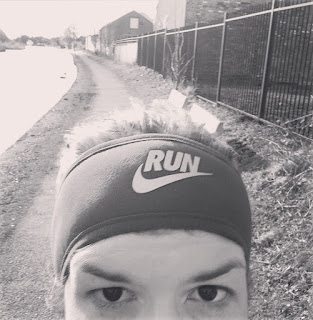 Part 1 - The Running Bit
The first 5 weeks were great! Long runs were around the 15 mile mark and I was feeling strong during these and my track sessions. My weeks were generally shaping up to look like this:

So my weekly mileage was already way bigger than it had been in previous marathon training - I finally feel like I'm doing different types of running sessions rather than just looking at the distance on my training plan and running all my runs at the same pace. This is thanks to running with the club - I would never have dreamt of going to track or doing hill sprints alone.

Also, in previous training cycles I didn't ever build on the base I had already made for myself, I just started my training at the same point each time. I was basically letting myself off the hook for more long runs but this kind of thinking is why my 3 marathon times are all pretty similar!

Having had a year off from marathoning last year has definitely helped me mentally too. Although my goal is bigger, the pressure I'm feeling for Manchester isn't. I feel like I've made a good running base over the last year from running with the club and feel way stronger than I have in my other training. So although I'm aiming for a fast time and I'm going to try my best to get there, I know that I'll have worked as hard as I can and if I don't quite manage it, it won't be the end of the world. As long as I try.

So all shaping up pretty well huh? Well that was all until about two weeks ago...I jetted off on holiday to Hong Kong (which was AMAZING!) with grand plans of going out running whilst I was there and continuing my training. Jetlag and holiday vibes got the better of me and the only running I did that whole week was a token 5k on the treadmill. Oops!

I thought it would be fine and I could just pick up where I left off, so after a steady 4 miles that Saturday I jumped straight in to an 18.5 mile run. NOT GOOD. I basically ran too far after no training and picked up an injury. I still attempted a track session the following Tuesday and had to abandon it after two reps and literally hobble home in agony. This meant no more running for another week. Annoyed with myself I went for a swim and tried to tell myself a rest would be good. Thankfully my brilliant physio Trevor worked his magic and gave me the go ahead to run. I did a steady and tentative parkrun to test the leg and although I could feel a niggle I wasn't in pain. So I am REALLY glad that I was able to complete my long Sunday run today, again at a slow and steady pace. I woke up this morning with not even a niggle and although the 16 miles felt tough at times, they weren't painful. I also dutifully stretched properly and got on the foam roller so fingers crossed I will be OK for the coming week. My priority this week is taking it steady so as not to injure myself again, but still get all my training in. 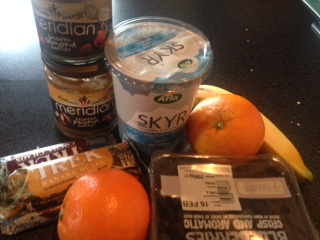 I've also been trying to eat and fuel my runs better. I've been attempting to eat more protein to stop the mad eat-everything-in-sight-hunger I get from my long runs. This seems to be working and I haven't woken up hungry at 4am since I made a conscious effort to do this. A good little trick I've found to keep the mad runger at bay are boiled eggs as a snack (the people in work LOVE it), and I seem to be jumping on the 'everything Nordic is cool' bandwagon and devouring Skyer for breakfast like it's going out of fashion. Protein ahoy! I have no idea if this is what I'm meant to be doing so don't follow my lead - but it seems to be working for me.

The nice people at Natural Balance Foods also sent me a job lot of Trek Energy Bars which are tasty and actually fill me up which not all snack bars do. They are packed full of protein and good stuff to fuel my body and I like to eat them before a heavy session like track, when I know I'll need loads of energy. The peanut ones are yum! And they are a tasty (and healthier) substitute for the continuous chocolate that abounds in my work.

Which brings me nicely on to lent. I do not believe in denying yourself food things and think if you run a lot then you can pretty much eat whatever you god damn like. But I did notice that I was eating loads of chocolate in work, just because it was there. I didn't particularly want it, I wouldn't have gone out and bought it, but I was still eating it. A lot. So for the first time I've given up chocolate for lent. It's surprising how much chocolate is in EVERYTHING. But I noticed that by cutting out chocolate I've been opting to eat things like those Trek bars, an orange or a yogurt, essentially things which will fuel me better as well as get me my sweet fix. This doesn't mean I'm on a super health fest though and deny myself everything nice. The extra food you need to eat is the best part of marathon training, and I still eat pudding. I'm not mad.
Hopefully just by being a little more conscious about eating better, I might run better too.

I guess the next 8 weeks will tell...