Well after 16 weeks of training the day was finally here - it was time man up and run the actual London Marathon.

I felt surprisingly calm the night before - I'd laid out my kit, painted my nails (all important marathon prep) and eaten my body weight in pasta. I was nervous sure, but also very excited!

I was in a right tizz however about what to wear. I knew it was going to be warm as I'd been frantically checking the weather all week, but the day before had been sunny but also chilly. I'd also done all my training wearing my pro skins long sleeved compression top which I love, and much preferred the feel of to my oversized charity vest. I therefore decided to wear both and then had a plan B of de-robing if I needed to....lets see how that went.

After the usual pre race brekkie of porridge, coffee and a banana I did a quick pre marathon photo and off we went to the finish. Friends had very kindly let us stay at their house in Greenwich so I had a really easy and chilled start which certainly took the stress out. Stepping out of the house the atmosphere was already buzzing with runners making their way in the sunshine. This was it!!

The start was like a little festival. I like to err on the side of caution and got there well before 9am. Baggage drop was quick and easy and the lovely ladies did a quick run through to make sure I had everything; phone, sun glasses, gels etc before taking my belongings. A little line for the loo and then time to soak up the atmosphere. People were so chilled, one guy was just sat reading the paper as if it was any normal Sunday morning. I on the other hand was already getting emotional!

I found my pen no problem, had a little chat with the burly male runners around me, and then we were off. This is it, the start of the marathon!! This year they put some stadium seating at the start and I was amazed at the level of support so early in the race. This continued the whole 26.2 miles.

It was congested at the start and for most of the race in fact, and I did feel like I was running slower than I normally would. However, I'd picked up some handy pace bands at the expo, one for 3:45 (dream time) and one for 3:50 (much more realistic), and could see that I was running at the right pace to get under my PB which is what I was hoping for.

I tried to break the run up into chunks with where I knew my supporters would be, which was mentally really helpful. First up, I was looking forward to getting to Greenwich where I'd heard the support was fantastic and was where Jamie's first station was. Running into an underpass with the biggest drums banging was unreal - the sound and the atmosphere was like nothing I'd experienced. It was SO loud and atmospheric. And this was true throughout the course, honestly at times the noise of the spectators was almost scary! Overwhelming but so good too!

Coming around the corner after the Cutty Sark I saw Jamie and his friends all waving and yelling - it was great to see them all! I shouted and waved like a loon, I was so excited! Then concentrated on getting to my next cheerers between miles 8-9. I was pretty much on track for the 3:45 up until mile 10 when I needed a wee stop! I probably could've gone on but I figured it would take two minutes and would rather stop and feel more comfortable. I usually would've been much more stubborn about this, but the whole race I felt relaxed and didn't want to add loads of pressure onto myself. I just wanted to make sure I enjoyed what I'd worked so hard to do - finish. I knew I'd done the training and was hoping for a PB so I just relaxed a little I think. Anyway, wee stop done and back on the road. 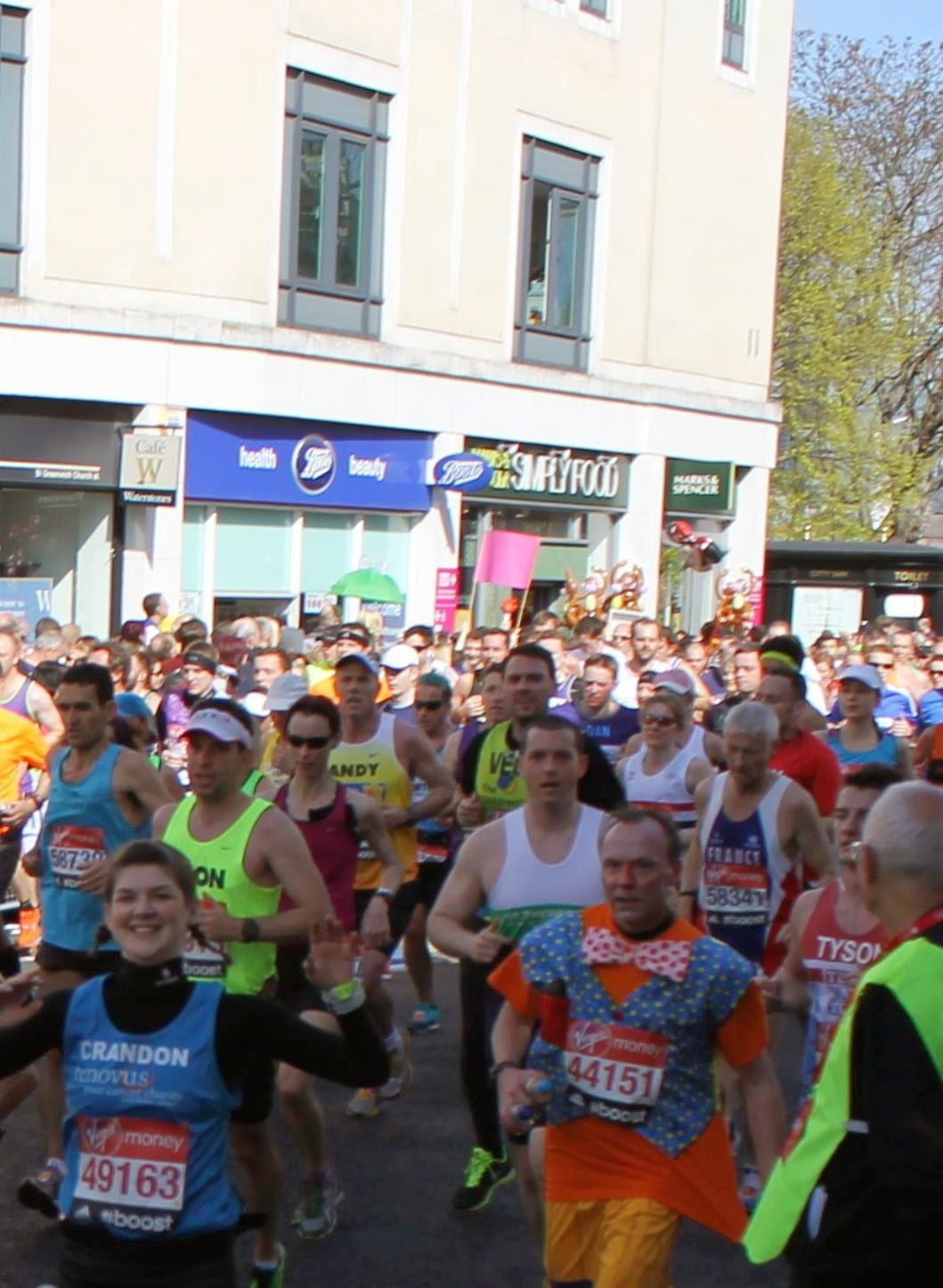 Then over the almighty Tower Bridge where again the support was amazing. You feel like a superstar running over something so iconic with all those people cheering you. By this time I was almost at halfway and feeling good. Apart from the heat. "What an idiot I was to wear a long sleeved black top on probably the hottest day" I kept thinking. So come mile 15 there was nothing else for it, I pulled over to one of the few barriers of the course with less people cheering, and stripped right down to my bra in the middle of the London Marathon. Lucky spectators at mile 15. You're welcome. Anyway, vest back on and Crandon back on the road and running, only this time holding the sweatiest top in London. Mile 17 I saw Jamie again, ran up, threw said sweaty top at him, quick kiss and off I went. That's love right there, agreeing to carry your girlfriends sweaty clothes for the rest of the day. Thanks Jamie!

By this time I couldn't believe we were already on our way to mile 18. The time was FLYING by, it honestly went so quickly! I tried to make sure I thought of the positives (Only 8 miles left) rather than give into the negatives (8 MILES STILL LEFT TO GO??!!Waaaaa??!!) but was starting to struggle. I thought I was going to have to channel Chrissie Wellington and recite the poem 'If' soon to keep me going. When who should pop up en route - Chrissie herself! Shouting and cheering us all on! I yelled at her, gave a huge wave and on I went. I was so excited!

Mile 22 came and I was so pleased to see my running superstar badass friend Ellie, who was spectating and cheering like a madwoman! And thank god, as I managed to hear her almighty cheers at one of the busiest points!

To see people on the route gives you such a lift, even when a runner in front saw someone they knew I got a lump in my throat yesterday. It was so emotional with so many people running for causes they believe in, to raise money for charity, in memory of loved ones, or just for the sheer joy of running itself. It was emotionally overwhelming and around 24 it started to hit me. But then came a tunnel of pure joy. No crowds, no sun, just runners, pumping music and balloons with little motivational messages - it was a nice little quiet respite to help you focus and get into the zone. And then all I kept thinking was "Keep going, keep going, there is no way you can stop with only 2 miles left" and before I knew it I was at Big Ben, then turning towards Queenie's house and then I was on the Mall. I thought the finish line was right down the other end of the Mall so I was elated to see it was sooner! And there it was THE FINISH. I'd bloody done it! Over the line in 3:51:50 a new PB by 8 mins.
I'd read somewhere that the marathon is just a 26.2 mile celebration of all the hundreds of miles of training, and after yesterday, I would have to agree. I'd written 'ENJOY THIS' on one hand and Jamie had written 'SMILE' on the other as little reminders to do just this. And it worked, whenever the going got tough I looked at my hands and immediately felt a little lifted. The sun, the support of the crowd, the atmosphere and the whole experience was brilliant. It was just as much fun you can have while running a marathon, I think and I was so pleased and proud to be part of it. Knowing that some of my favourite people were supporting me and cheering me on along the way was the icing on the cake.

If you ran, huge congratulations on your achievement. And if you cheered at home or in person, thank you. You are amazing.