After last year's London Marathon I knew I wanted to run Manchester this year. I was still searching for that elusive 3.30 time and was hoping the flat course and smaller running field would help me get it, before running London Marathon with my Good For Age time for 'fun' a couple of weeks later.

The day was absolutely brilliant! I kept trying to channel positivity and not get too stressed before hand and it seemed to work. Having run Manchester a few years ago I really thought this would be a head down and get on with it type race, but the support was amazing and the atmosphere on course was much better than in other years. It was just great.

My training had been quite different to last year. I'd logged fewer miles but ran with more purpose - thinking quality not quantity was the aim of the game. I also started doing more strength training (hello early morning Kettlebells) and I even wrote a race plan the day before which I really thought about and stuck to. This was quite a revelation for me and really helped me focus and stick to my guns during the race. My plan was go out steady at 8ish minute miles until 20 miles. Then see how I felt and push it if I felt strong. I used the Compete training journal which has loads of good advice and tips for competing and racing. I read how racing with integrity means racing to your plan and that really stuck with me on the day. I also didn't drink for over 8 (loooong) weeks and really concentrated on my nutrition and sleep the two weeks before the race.

But by far the biggest change in this years marathon was running with my pals Hannah and Heather from my running club. Hannah and I had talked about running together a few weeks before and were glad when Heather joined us too on the day. We also had fellow Harrier Anne join us mid race who absolutely stormed her run! She kept saying how relaxed we were and we were like, 'but Anne, you're running with us!' Having such strong ladies around me meant I didn't let myself off the hook at any point as I needed to keep up pace with them. I also didn't have any of the negative thoughts which usually plague me during the marathon and I just kept believing I was going to do it.

Three or four ladies running together in the same vest really has its advantages and at about the 16 mile mark I noticed we were getting loads of attention from the crowds. People kept yelling 'Looking strong ladies' and giving us loads of support. It was brilliant. Running together also meant we had each others' supporters to look out for along the course, as well as our own. I had prearranged with Jamie where he would be and I managed to see him at three different spots which was brilliant. Supporters are such a huge part of the day, as well as being really understanding and supportive throughout the the whole training cycle. We were also lucky enough to have a few fellow harriers cheering us all on too. 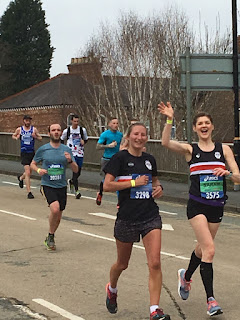 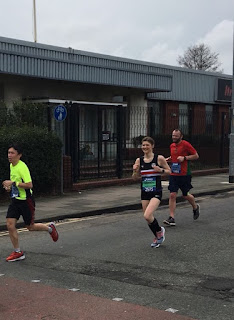 Running together meant we could have a bit of a chat and the miles seemed to fly by. Then came the 'quiet' miles where it was head down time. I could see Hannah was focused and she pushed on at mile 18 but I knew I wasn't ready to do that yet and thought of my plan. So I stuck to it and waited until about 21 miles until I pushed on. Mile 25 was torture but the crowd were brilliant, really calling your name and pushing you onwards. I could feel cramp threatening but managed to keep it at bay until then end. I thought I had time in the bank but not quite enough. Finally mile 26 came and then I could see the finish. I pushed as much as I could with my legs screaming at me and trotted over the line in 3.30.06 - exactly what I'd aimed for. It took over three years but I finally got there. A new PB, my second BQ and another London GFA. ELATED! I didn't even care about those 6 seconds...

I definitely could not have done it without all the support on course and without Hannah, Heather and Anne. We were a right little badass group and this is one marathon with memories I will savour for a long long time.

Manchester you were BRILLIANT.