Swim for Restoration at Victoria Baths

I've been meaning to go on a visit to the famous Victoria Baths for ages, but for one reason or another never quite got around to it. So I was really excited when I heard they were filling the gala pool and opening it for swimming to the public for the first time since it closed in 1993. Tickets for this 'one day only' event were hard to come by and sold out faster than Glastonbury, so I was pleased I'd been poised and ready to spring into action.

Victoria Baths holds a special place in people's hearts here in Manchester, and when you're there you can see why. Opened in 1906 it was described as a 'water palace' and since it's closure 24 years ago, has been under restoration with the ultimate aim to reopen it for swimming and public use. 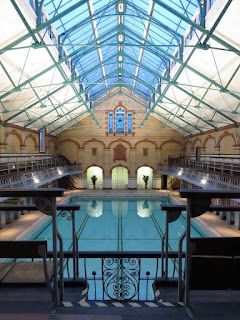 I've neglected my swimming somewhat since my triathlon almost 2 years ago (!) and only managed one open water swim last year. I know, terrible. So this year I am hoping to get back in the water with a bit more dedication.

We arrived a little before our swim time, had a wander around the gorgeous building and booked ourselves on a post-swim tour, before heading up into the spectators gallery and watching the swimmers in the first session. The atmosphere throughout the whole day was great; painters and sketchers were on the balcony capturing the day, the media was there in full force, and some swimmers even arrived dressed to the nines in old fashioned Victorian swimming costumes complete with straw boaters (which yes, they swam in!) Everyone was just really happy and excited to be there and the atmosphere was so infectious. 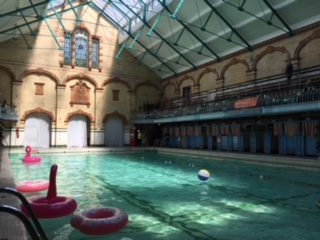 10 minutes before our swim time we entered the gala pool area and were shown to the old fashioned poolside cubicles to change. We were told we couldn't enter the pool until the whistle blew. Everyone was pretty giddy! We messed around taking photos and then all stood on the side of the pool waiting for the 3, 2, 1 countdown. The whistle blew and in we all jumped together. It was so fun. 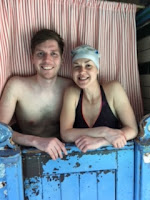 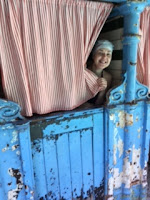 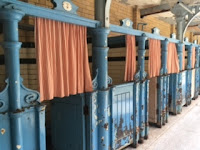 There were some serious swimmers doing their lengths and we mixed it up with a bit of lane swimming (500 metres for us in total - ha!) and a bit of leisurely swimming taking the whole thing in (read; playing with flamingo inflatables and beach balls.) It was a but chilly but totally worth it. I even earned my first swimming certificate in over 25 years! What a brilliant day, a great cause and a lovely way to get back into my swimming. If only every swim could be in such a pretty and inspiring setting.

You can read more about the restoration of the baths here. 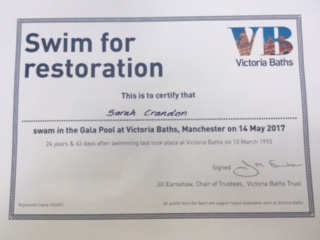