Last week I visited my brilliant physio Trev at Fulcrum Sports Therapy for him to work his magic on my tired legs following my half marathon.

Trevor was recommended to me whilst I was training for my two marathons last year, and he is brilliant. I honestly don't think I would have made it to the start line of the Berlin marathon without him. During that time when I was injured we discussed possibly using a snazzy recovery contraption and this week he suggested I trial some out as part of my post half marathon recovery. 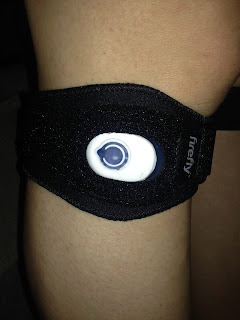 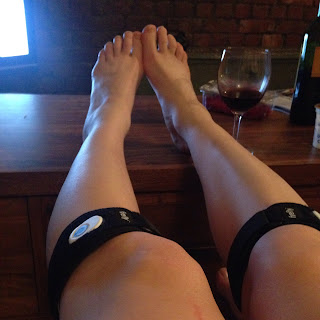 These strange little recovery devices made by both Geko and Firefly, emit small electric pulses into your muscles to emulate light active recovery like walking, allowing better blood flow but without the energy of activity. So they are meant to be great for recovering athletes of all sports. And they let me pretend I was a pro athlete so that gave them immediate bonus points.

At first I found them a little hard to position. You need to put them on so they make your foot, as well as the muscles in your lower leg visibly jump. One leg was fine, the other took a little while to work it out but I got there in the end.

It felt really weird! Little pulses flowed through my legs making them twitch and you can turn the strength of the pulses up and down, but its a relatively nice sensation. After a little while you forget that they're even there. On my first night, two days after my half marathon and with aching legs, I tried them overnight but only managed a few hours sleeping in them but this was mostly due to the bulky straps keeping them in place rather than the shocks they gave me. In the morning I awoke and apprehensively got out of bed, bracing myself for the DOMs which had been there the day before. But they weren't there! My legs felt so much better. I'm not saying they were 100% gone but more of a background ache than a wince as you stand which you usually get.

I even managed a 25 mile cycle that day. Knowing that my legs would feel tired after this I also put then on again for a few hours that evening and the next day my legs again felt great, and noticeably less tired that they had for the same cycle the previous week.

I would love to try these after a marathon when the DOMS are so bad you have to just laugh because literally everything aches! I can only imagine how much better they would make your legs feel and I'd be interested to try.

Available from both Geko and Firefly I'll leave it to their websites to go into the whole science and benefits but I found that they helped a treat and would give them a go again after a particularly grueling run.

Trevor kindly gave me these to try for free and knew I'd be writing a little post about them. If you live in Manchester and in need of a physio go and see Trev, he'll definitely sort you out.
Posted by CrandonRuns at 21:56