I’ve recently decided to try and do more local races, and with this in mind I entered the ‘We Love Manchester 10k’ and ran it back in July. With a 12 mile run showing on my marathon training plan that week however, I was unsure how to incorporate the race into my weekly schedule. Should I just run the 10k as an extra run? Or sack off my 12 mile run altogether? Neither of these seemed like a viable option so I decided to incorporate the race into my 12 miler. Yes, like a running loon.
Luckily the race start was 3 miles from my house, so I ran to the race HQ, did the 10k (6.4 miles) and then ran the 3 miles home – therefore getting both the race and the training distance under my belt! Phew!
No PB was expected by doing this as I was keen to ensure the 12 mile marathon training was the priority rather than the race, however I did secretly wonder if I’d improved on speed since my last 10K in November…turns out running to a race is a good warm up and I managed a PB by 3 minutes of 45:54. I am also enjoying the symmetry of this number. Wahoo!
So how was the race itself? Read on for my race report:
WE LOVE MANCHESTER 10K - 13th July 2014 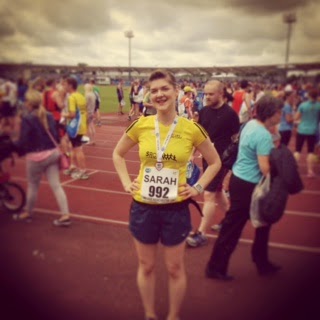 Race Organisation
This was OK. It was organised through Sports Tours International, and I was expecting a little more from them I think. There wasn't a lot of information sent out, and I found the website difficult to navigate and find certain info. I had to trawl through it to find even the important info like a course map. But the start details and race numbers were all sent out OK.
Starting Location
This was by far the highlight of the race and I suspect the reason people keep coming back to do this 10K, as it starts and finishes in the Regional Athletics track - making you to feel like a real rockstar runner with support from the stadium seats. However, there wasn't a whole lot of organising. The DJ and warm up were pretty dire and there weren't any starting pens depending on speed. The start was therefore a little bottle-necked, but OK.
Route
If I was a visitor to Manchester and ran this course, I would not think ANYONE Loved Manchester. Miserable, industrial and boring is how I would describe the route. Apart from starting and finishing in the stadium, there isn't really anything else going for this course. There was not one landmark I could tell you, but there was an awful lot of tarmac. The route also tricks you into thinking you're almost at the end when you start heading back into to stadium, only to realise that you're actually going out again and back on to the boring old main road. It had more hills than I was anticipating too. Hearing them calling your name over the PA system as you entered the stadium and ran down the track to the finish line was pretty damn cool though.


Crowds
The atmosphere within the stadium was pretty good with lots of support, and at the beginning as you ran out into the main route. From there it was pretty sparse though, due to the out of town course route I suspect.
On Route Drinks and Snacks
I think there was one well placed water station at a decent mile point, but I didn't use it. There weren't any snacks/gels that I remember but in a 10K I think this is OK.

Official T Shirt
The T shirt shows the We Love MCR Charity logo which I like - despite the T-Shirt being GINORMOUS even though it was supposedly a small. Its literally like a nightie! But its a good strong design (although apparently runs in the wash!) 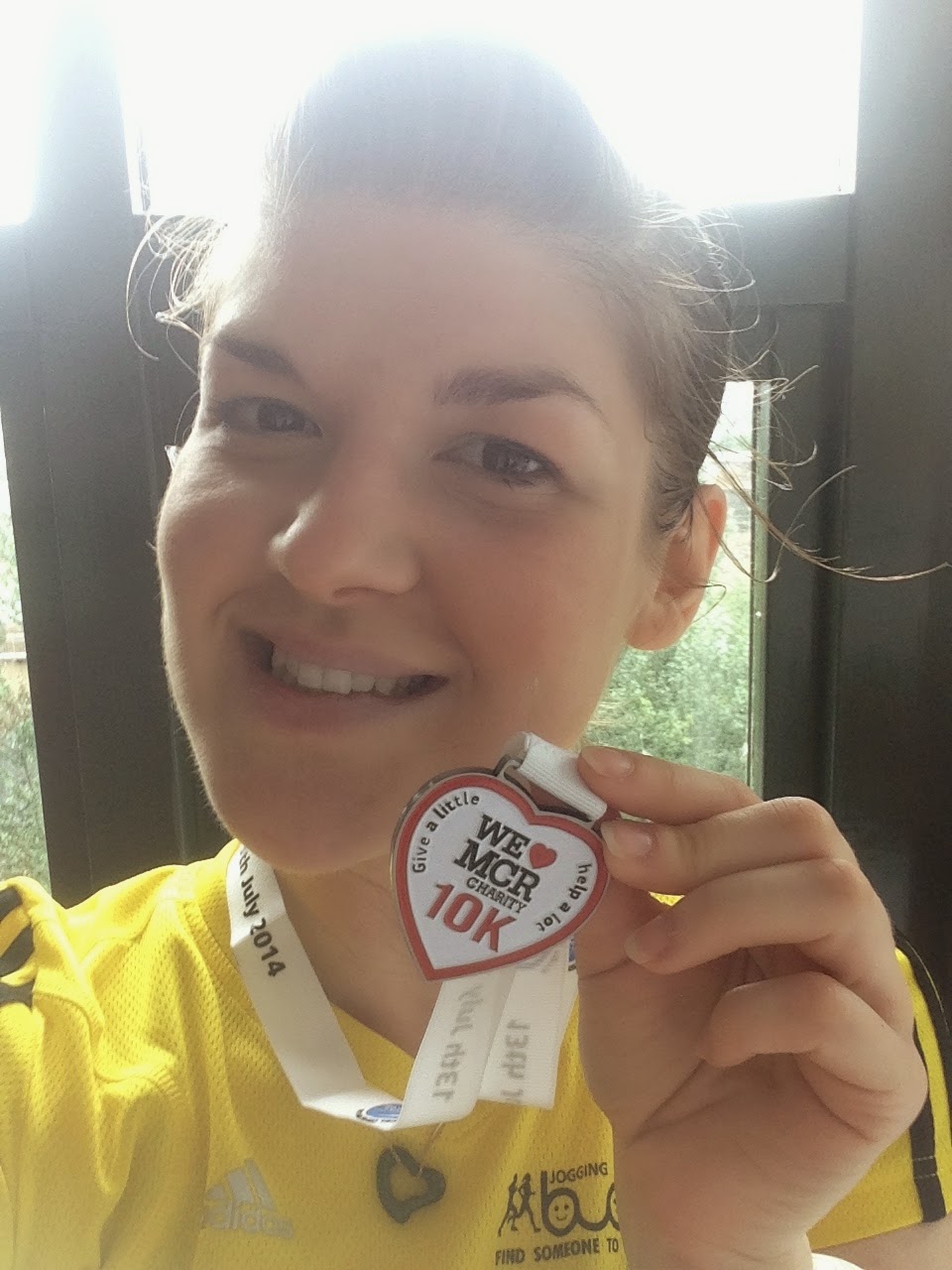 Medal
Small but again shows the We Love MCR logo - I like it!

Marks out of 10
6/10 - an uninspiring route but I managed a PB and the bit in the actual stadium is good. I would do it again but purely due to it being close to home, and a much better price than say the Great Manchester 10K which is extortionate! I wouldn't recommend you make a journey for it if you live outside Manchester though. Although as its for the We Love MCR charity it gets a couple of bonus points.
Posted by CrandOnRuns at 21:30